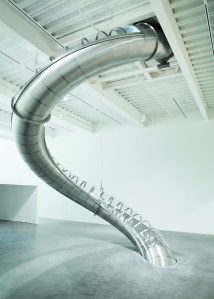 It’s 11 in the morning and visitors to Carsten Höller’s new exhibition, “Experience,” are emerging one by one down the shoot of a 102-foot-long slide. The structure itself, which bores through two concrete floors of the museum, looks like nothing so much as the pneumatic mailing ducts from the movie Brazil, long snakes of stainless-steel segments. The sliders’ feet are wrapped in canvas blankets, their arms are crossed over their chests. They board on the fourth floor; you can see them shoot by on the third floor through the slide’s transparent upper shell. The expressions on their faces are ecstatic. They land with whoops and thuds on a mattress on the second floor.

This exhibition features every possible hazard. It is slippery when wet. It may trigger photosensitive epilepsy. It is nothing if not engaging, yet it is somehow ominous. Suspended from the ceiling of the gallery above the long line of people waiting to use the giant slide are live canaries in outsize steel birdcages (Singing Canaries Mobile, 2009). Evoking the canary in the coal mine, the birds suggest that we, the viewers, are test subjects of sorts.

Other sculpture names don’t alleviate that suspicion. Giant Psycho Tank (1999/2000) encourages viewers to change out of their street clothes, shower and float naked or in swimwear in saline water heated to body temperature. Cotton robes and a viewing window allow for both post-tank modesty and in-tank voyeurism. While The Observer was there an international television crew filmed as the sole swimmer floated. A man in a Pink Floyd T-shirt walked by wearing Mr. Höller’s Upside-Down Goggles (2009/11), which turn ordinary vision upside down, and waved and tittered cheerfully at the cameras.

Since the curator Nicolas Bourriaud declared in the 1990s that “art is an activity consisting in producing relationships with the world,” exhibitions about encounters, hands-on events and spectator participation, or as this show is entitled, “Experience,” have abounded in museums, biennials and galleries. The work featured is often called “relational aesthetics,” a term of Mr. Bourriaud’s invention.

The Belgian-born Mr. Höller has been known for two decades for his giant psilocybin-mushroom sculptures, funhouse slides and other kinds of interactive sculptures that walk a knowing line between the scientific and the psychedelic. With pieces like Pill Clock (2001) on display, its thousands of white gelatin capsules falling from the museum ceiling and available to swallow, the “Experience” of Mr. Höller’s title might be understood in two ways: it might refer to bodily knowledge through the practice of relational aesthetics, or it might take Jimi Hendrix’s connotation. Perhaps both.

One thing interactive sculptures like Mirror Carousel (2005), a giant, functioning carousel, Untitled (Slide), Giant Psycho Tank and Upside-Down Goggles have in common is the waiver required to engage with them. As if they were Coney Island rides, you don a wristband once you have signed a paper that states that you are of legal age, not subject to certain health risks, and “understand that the exhibition and the artworks … are artistic activities that can be viewed and also physically interacted with,” yet may be hazardous; in the inimitable legalese of the City of New York, you sign that you “accept the exhibition ‘as is.’”

This requirement to “accept the exhibition ‘as is’” is the most interesting fantasy of “Experience.” We are not being asked to see and judge, to talk about beauty, or what we like or don’t like. We are being asked to let go of such aesthetic criteria and replace them with participation.

In fact, there is little to see in “Experience” besides the spectators themselves. Although the show features nearly three dozen works, it feels sparse. The walls are almost entirely bare. Some pieces are very minor interventions like a phone on the wall that occasionally rings to bring the voice of someone talking about money, love or art into the museum (What Is Love, Art, Money? 2011). A few delicate glass sculptures like Atomium Slide House (2003) and High Rise Sculpture (2006) look like afterthoughts, architecture built of laboratory titration material. For the most part this work avoids the decorative and visually pleasurable in favor of the functional and the physical encounter.

Six new sculptures on the second floor are one exception. These are giant, polyurethane cousins of a toy store’s cast-rubber animals, including a reindeer, a rhinoceros, a crocodile and a hippo, done in bright pink, yellow, green and orange. They are infinitely less absorbing than the participatory work, and their portion of the exhibition space—about half the second floor—feels like a dead zone despite the vivid colors employed.