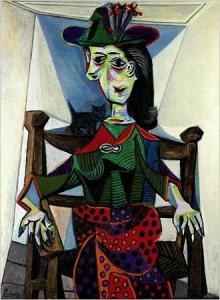 Secretive billionaire art collector Bidzina Ivanishvili, who is hoping to spend some of his fortune to become prime minister of Georgia, flew foreign journalists to his home country and invited them into palatial estate in the capital of Tbilisi, which he refers to as “the James Bond house.”

The Sunday Telegraph‘s Andrew Osborn was one of the lucky writers who earned an invitation, and provides a fascinating look at Mr. Ivanishvili’s art collection and life, writing:

“A sizeable chunk of the owner’s $1 billion art collection is on show, albeit with a curious twist. Pablo Picasso’s Dora Maar with Cat hangs on one of the walls (bought for $95.2 million in 2006), while a $40 million canvas by Egon Schiele adorns the main office. The twist? These are all replicas. Afraid of being shaken down by the country’s cash-hungry government, the originals are stashed away in London.”

Mr. Ivanishvili told Mr. Osborn that he is “not a big art lover,” but said that he eventually wants to open a private museum in Georgia. He also shared these thoughts:

“What is a luxury lifestyle? I have a villa in my village, a villa on the coast and this place. I do yoga every day, some sport, have a meal once a day, eat some fruit, and drink one glass of wine. And once a month I gather together my close friends. But my wife and I do not like conspicuous luxury.”

In fairness, the billionaire claims to spend $10 million a month on charity, funding numerous cultural projects in the country, and is trying to unseat a ruling government that many outside observers say is tipping toward dictatorship.

Also, in his home village, Mr. Ivanishvili pays locals an “£80 cash gift every month, and a £1,200 gift if they get married–-with the wedding itself paid for–-and can have their houses renovated, or rebuilt from scratch, complete with white goods and furniture, for nothing.”