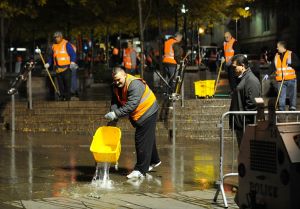 New York City sanitation crews clean Zuccotti Park after city officials evicted the ‘Occupy Wall Street’ protest from the park in the early morning hours of November 15, 2011 in New York. Occupy Wall Street protestors most feared the coming winter, but it was on the mildest of nights, when activists slept soundly in their tents, that New York police sprang a surprise operation to end the eight-week demonstration.
AFP PHOTO/Stan HONDA (Photo credit should read STAN HONDA/AFP/Getty Images)