The “disruptive” protester called attention to himself by shouting, “Bob Turner has only been in office for two months and.” Before he even finished his sentence, he was grabbed by his shirt and dragged backwards and out the door Forrest Hill’s of Metropolitan HS’s cafeteria by ex-marine and former NYPD officer Kevin Hiltunen.

Seeing as Mr. Hiltunen isn’t part of any organization currently, his actions were that of a private citizen assaulting another private citizen. Here’s how the New York Post spun it after leading with “Meet New York’s newest hero“:

“I guess you could say I sorted him out,” said Hiltunen, 48, his jacket and tie barely mussed after dragging the scruffy protester out on his rear end.

“All I was doing was trying to stop this historic occasion from being disrupt-ed. There is a time and place to exercise your First Amendment rights,’’ said Hiltunen, of Bergen Beach, Brooklyn, who was identified by people at the ceremony as an ex-Marine.

“This was not the time or the venue,” Hiltunen added.

Mr. Hiltunen should know a lot about when it’s okay to exercise one’s first amendment right’s…like say, during a rally calling for Anthony Weiner‘s dismissal in front of the former congressman’s office.

If the megaphone wasn’t enough to sway you on how much Mr. Hiltunen believes in the power of free speech, just read some of his quotes from Weinergate, where he loudly called for the congressman’s dismissal and got into altercations with pro-Weiner liberals. He also lead a rally cry during the protest, screaming “Weiner, you’re fired!” into a bullhorn.

Free speech for some! 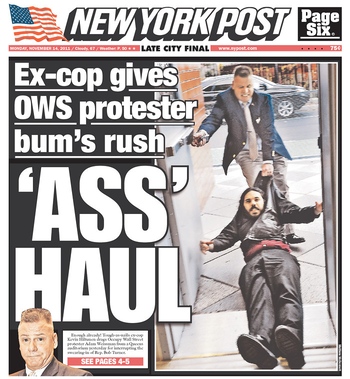