Elizabeth Mayor Chris Bollwage opened up another battlefront on the Elizabeth Board of Education today, firing off a letter to retired Justice Gary Stein that slams Stein’s stated efforts to audit the embattled board.

Following an investigation by the Star-Ledger suggesting political patronage machinations, the board hired Stein to determine the extent to which its 4,000 employees receive top-down pressure to contribute financially to the organization’s political apparatus and to “volunteer” for political campaigns.

But amid news reports today that the FBI is questioning board employees on top of an ongoing state Attorney General’s investigation related to the arrest of School Board President Marie Munn, Bollwage openly accused the judge of protecting the board – and by extension Stein’s son – as part of an otherwise pointless exercise.

“You were publicly retained to conduct an internal investigation of the Board, it is evident that the real intent behind your leadership role was to expose internal conflicts including uncovering whistle blowers, cheaters and paying to keep jobs,” the mayor wrote. “I believe you were retained to draw attention away from the enforcement of personal agendas, continuous mismanagement and financial waste of valuable taxpayer dollars by the Elizabeth Board of Education.”

State law enforcement officials arrested Munn after an investigation revealed that her own children received reduced-price lunches even though Munn’s family didn’t qualify.

As the paper continues to reveal a widening investigation, the mayor blasted Stein for trying to be a human shield for a board where a member of the judge’s family stands to gain.

“With your own son employed as outside counsel for the Board of Education and submitting bills in excess of $200,000 for a one-month period, the very nepotism that you were supposed to be investigating has now compromised both your independence and judgment,” Bollwage chided Stein. “Clearly there is a conflict of interest and an ethical dilemma with reference to an inquiry of events, individuals and practices that involve those who have retained your son as their counsel. The fact that a former member of the Supreme Court or his firm would even be remotely involved with this review is unconscionable and certainly questionable, because with such family ties, the results would produce anything but an independent analysis.” 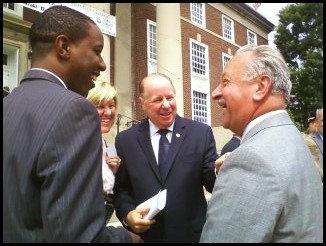