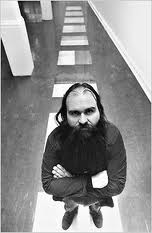 Calvin Tomkins’ long-awaited profile of sculptor Carl Andre was published in this week’s New Yorker. It is really something. First there’s the jarring opening picture of the rarely-photographed Mr. Andre and his wife, the artist Melissa Kretschmer, (the last photograph we had seen of the artist was from the late ’70s, when he had a Karl Marx beard and was rail-thin). Standing in what looks like a very modest apartment, he is completely bald, wearing the overalls he’s sported for several decades now, and an over-sized cardigan on top of that. We weren’t expecting him to be clean shaven. Here are some other details that took us by surprise.

– He started wearing overalls not because of solidarity with the proletariat (as is often believed), but rather as a result of his “belly.” “All my life, my weight fluctuated enormously, and these were the only clothes that fit me,” he told Mr. Tomkins.

– He studied poetry with John Crowe Ransom at Kenyon college, but, by his own admission, drank himself out of school.

– His entire career in so-called Minimalism was based on a misreading of something Frank Stella once told him. Mr. Andre had shown Mr. Stella a piece of timber that he had carved up on one side, leaving the other side untouched. Of the uncarved side of the wood, Mr. Stella said, famously, “You know, that’s sculpture, too.” Later, Mr. Stella would tell him that what he meant by the statement was that he had to carve on the other side of the wood as well.

– Mr. Andre claims to have been asleep when his former wife Ana Mendieta fell from their window on the 34th floor of a high-rise on Mercer Street (he went on trial for murder and was later acquitted; he still lives in that same apartment). “It had been quite balmy,” he told Tomkins, “like eighty degrees, and the temperature went down all of a sudden. What Ana did was to get up and start closing the windows, because cold air was blowing in. Ana had to climb up–she was, you know, barely five feet. To close those windows you had to do it from the middle, so they wouldn’t jam. And in trying to close those windows she just lost her balance.” For years, the art world was divided as to what happened that evening.

– As for all the critical theorizing about Minimalism, Mr. Andre “thought that was nothing but bullshit.”

Here’s a link to the article (subscription only). The issue is on newsstands now.