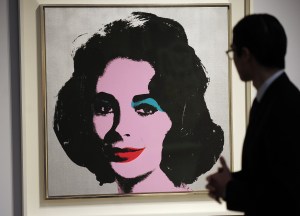 It was one remarkable week at the New York contemporary art evening sales. As the global economy tanked, Sotheby’s and Phillips de Pury & Company filed generally strong results, while Christie’s nailed its best performance in the category since 2008, its second best ever. With all of that money flowing, the art world’s key players had plenty of great things to say this week. Below, our favorite quotations, from the reporting of our colleagues and competitors.

“It was a good beginning. A fairly robust sale for a sale of generally not stellar material.” – Art advisor Stefano Basilico at Phillips de Pury & Company, Gallerist, November 7, 2011

“Of course I’m happy. Wouldn’t you be? This was the one opportunity to get it, and it’s a beautiful painting and it complements my ‘Red Liz,’ so I’ve got the two best ones.” – Collector Laurence Graff at Christie’s, after buying Warhol’s Silver Liz, Artinfo, November 8, 2011

“People would rather have art than gold or paper.” – Collector Eli Broad at Christie’s, The New York Times, November 8

“There is a flight out of cash into what is called art.” – Richard Feigen at Sotheby’s, The New York Times, November 9

“I wish I had some Richters.” – Collector Mera Rubell, reacting to the strong showing of work by the German artist at Sotheby’s, Bloomberg, November 10

“You see people demonstrating out there, people are out of jobs and their houses. And people in here are dumping millions into art.” – Dealer Richard Feigen at Sotheby’s, Bloomberg, November 10

“Why do you like these paintings so much?” – A “mystified German colleague” at Sotheby’s, Artnet, November 10

“Nothing can a stop a collector. People believe in art and it goes up and up and up.” – Dealer Barbara Annis, Bloomberg, November 10

“The art market is impressive right now. I don’t think it really matters, if the confidence is there. There’s obviously a lot of money in the world, and art’s become a focus.” – Dealer Larry Gagosian on the economy and the market, Gallerist, November 10

“Clearly if these things are related, they are related inversely.” – Pace president Marc Glimcher on the same topic as Mr. Gagosian, Gallerist, November 10