TRENTON – Gov. Chris Christie fielded an array of questions today, including why he restored legislative staff salaries slashed in his budget vetoes.

“You wanna cut positions out of me, I’ll cut positions out of you,” Christie said of the recent reports of quiet restorations of legislative salary cuts. The cuts that he made in his veto override were in response, he said, to Democratic cuts of positions in the Department of Environmental Protection: “They didn’t like the people who were in there.”

Once the Democratic leadership of the two chambers – who control the budgets of both the majority and minority – indicated that the entire budget reduction was going to be applied to only the minority Republicans, Christie thought twice and restored the money.

Christie said he never made up his mind how his proxy was going to vote on the now-delayed DRBC fracking proposal.

“I haven’t taken a position yet on those (proposed) rules,” he said. “I didn’t make any final decision on this.”

He said he’s examining “the science” of the hydrofracturing technique, with a mind to the safety of residents foremost.

On the rally of anti-fracking environmentalists who called the delayed vote a “win,” the governor said, “If they consider that a victory then congratulations to them.”

Christie said he’s been “relatively uninvolved” in the ongoing attempts to pass or block telecom deregulations, although he was one of the contributing factors when the Verizon-backed bill failed earlier this year.

The main objection Christie had at the time – and still has today, as a new bill has emerged – is whether seniors will maintain access to affordable landline phone coverage.

In fact, when the bill died in April, Christie characterized his concerns as “grave concerns,” but he’s not jumping into the coming fray over which bill is better.

A united front of Newark and Essex County officials asked Christie to slow down his pace on the proposed merger of the University of Medicine and Dentistry of New Jersey (UMDNJ) and Rutgers University last week. Asked today whether he thought the concerns were valid, Christie said he was already proceeding with caution.

The first preliminary report only dealt with issues concerning the New Brunswick and Piscataway branches of Rutgers, whereas the coming report will focus on Newark and South Jersey, Christie said.

Newark Mayor Cory Booker said his concerns about the proposed merger have not been addressed by the administration satisfactorily, but Christie said his people are listening.

“I don’t think Cory really means that,” Christie said. “I understand they felt the need for a press conference,” but, “The current structure (at UMDNJ) is…corrupt.”

On the allegations that his administration is abandoning Newark, he called it a “solution in search of a problem.”

“I think I’ve shown a great deal of commitment to that city in many different ways,” he said.

Low revenues, but what if OLS numbers were used?

Christie said he can’t say whether the state will make up the ground it lost in reveue collections through the rest of the fiscal year.

What he did say is that the state is much better off by using his administration’s conservative estimates – which are being undershot – than by using those of the Office of Legislative Services.

“I think that the treasurer has taken a prudent approach to this,” he said. The low income levels – blamed in part on bad weather – “should put to a rest” the debate over whose numbers should be used when crafting the budget. “We’re $210 million below what we projected,” he said, and would be looking at “impound already authorized funds” if the state was using OLS projections. He also called on OLS to “put out an apology” for being critical of Treasury numbers this summer. “I believe it was politically-motivated projections,” Christie said. 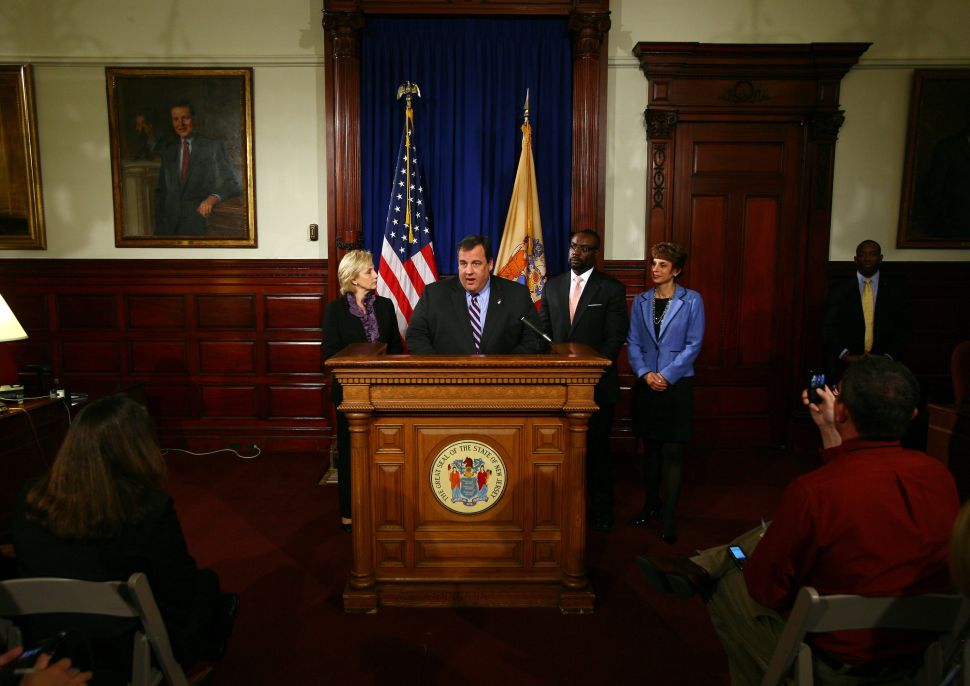