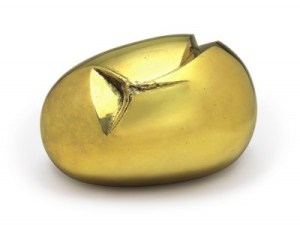 "Le premier cri" by Constantin Brancusi, which sold for a purchase price of $14.9 million (Courtesy of Christie's)

The fall auction season kicked off last night with a disappointing Impressionist and modern art sale at Christie’s that filled the auction room with murmurs and tut-tuts, as fewer than half of the 82 lots on offer sold within or above their pre-sale estimates. The sale’s total was $141 million (once buyer’s premium was added), far below the auction’s $211.9–$304.3-million pre-sale estimate.

At a press conference after the event, New York department head Conor Jordan pointed out that the sale’s result was just “a little lower” than the figure earned by the Impressionist and modern sale in May, which brought in $156 million, though that auction did feature about 30 fewer lots. International department head Thomas Seydoux said buyers may have been hesitant because of recent economic developments in Europe, including a Greek bailout deal that is by no means finalized.

“We thought the works of art were good enough to handle them,” Mr. Seydoux said, of the European market conditions. “We were wrong.”

It wasn’t all bad news. A new record was set for Max Ernst by his 1941 work The Stolen Mirror, which shot to a purchase price of $16.3 million, well past a previous high of $2.7 million for the artist, and a golden Brancusi sculpture sold for $14.9 million after some underbidding by gallerist-king Larry Gagosian. But of the 82 lots on offer, 31 went unsold, a rather dismal sell-through rate of 62 percent. No less than 10 lots found buyers below their low pre-sale estimates, indicating that collectors may have been willing to sell, even at lackluster prices.

“There will be a lot of thought about estimates going forward,” Mr. Jordan said. “The market seems more sensitive, more selective. I think we have to be more cautious with the estimates.”

“The quality was not what one would expect in an evening sale,” Ms. Cecil said.

“I thought the estimates were too high,” said dealer Christophe Van de Weghe. “I think the pictures that were priced right sold. The ones that had a high estimate had no chance.”

A standout moment from the auction came during the bidding for a bronze cast of Edgar Degas’ Petite danseuse de quatorze ans (c. 1879-1881), which had been featured in promotional materials for the auction, but was ultimately what Mr. Jordan called the house’s “headline casualty.” Estimated to sell for between $25 million and $35 million, it failed to find a buyer and was bought in at just $18.5 million.

“I’m sorry, sir,” the specialist at the phone bank said quickly, drawing a horizontal line in the air. He’d misunderstood. No bid.

Helly Nahmad, of the eponymous New York gallery, called the auction “fair at best,” and said that the failed Degas set a bad tone for the rest of the evening. “People got scared to bid after the Degas wasn’t sold,” he said. “It affected the whole mood of the sale.”

In fact, the Ernst wasn’t the only piece set to set records. The $5.1 million purchase price for Pablo Picasso’s La femme qui pleure (1937) marked a new world record both for a single print and for a Picasso print.

The action continues tomorrow at Sotheby’s.