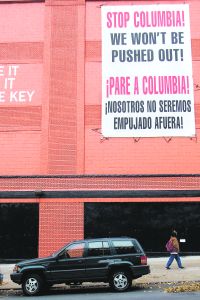 A sign protesting the expansion of Columbia University into the Manhattanville neighborhood of West Harlem hangs from the side of a Tuck-It-Away warehouse in New York, New York Friday, November 23, 2007. Columbia University’s $6 billion expansion plan in Harlem may win approval from a New York City panel next week, five years after the school began an effort to double in size. Photographer: JB Reed/ Bloomberg News