No, it has nothing to due with the Mister PeePee, the chronic, chronicling jack-off artist with a penchant for pumpkin soy lattes. The reason that several of New York City’s 180+ Starbucks locations are closing off access to their restrooms is because of you.

Well, we mean that as the collective “you.” According to sources speaking to The New York Post, long lines and lack of employee-only facilities means that the chances your barista has been holding it in for five hours (and three shots of espresso) is disturbingly high.

The item cited locations at 45th Street and Sixth Avenue, Spring Street, and at 67th Street and Columbus Avenue as having reduced the number of their public toilets.

“They are not eliminating bathrooms, but feeling the pressure of more people,” the source told The Post. (Not to mention the bladders!)

As this  is not official company policy, it will be up to individual coffee-slinging locales with seating for under 19 people (any more, and you legally have to provide a potty) to decide whether to keep a john open for business.
And let us just add: as several of us have actually worked at Starbucks somewhere in our secret resume, those public bathrooms are the worst place in the world to clean up. The only loo we’d like to sweep up less than a Starbucks would be the ones in the McDonald’s near Zuccotti Park.
(Photo via Flickr) 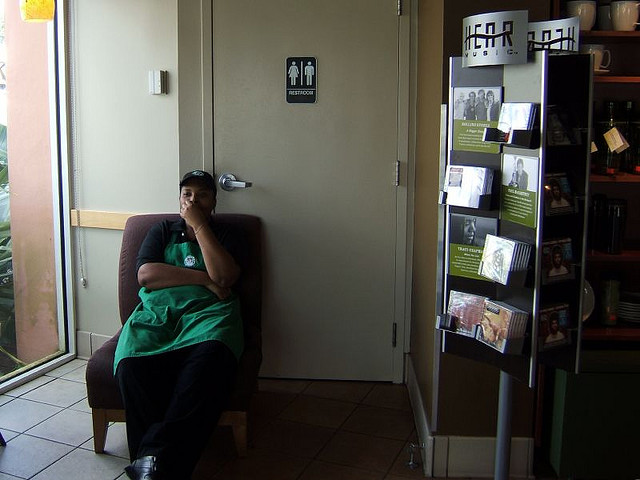