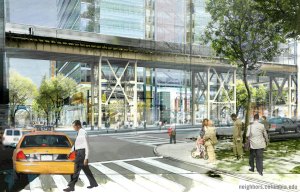 Known as the Lenfest Arts Center, after a $30 million pledge by Philadelphia philantropist H.F. Lenfest…

“…the structure will be designed by the Renzo Piano Building Workshop and will contain a performance space and presentation space for readings and seminars, and a state-of-the-art film screening room. It will also serve as a facility for Columbia’s School of the Arts, according to Columbia University President Lee Bollinger.”

While Columbia’s expansion has not been entirely welcomed by its neighbors, DNA Info reports that the arts center plans have been praised by local institutions.