We arrived at Zuccotti shortly before 2 p.m. as dozens of cops ran towards Zuccotti Park to quell an apparent altercation. Some protesters told us that one protester had provoked police and The New York Times reported that the protester had flicked a police officer’s hat. The resulting swarm of police in the park caused chaos however, as shown in this video provided to The Observer by one participant, in which she is shoved to the ground. Later in the video, a protester said to have angered the police officers is seen bleeding from the head.

“We were very confused because it had been a very quiet moment in the park, people were singing and dancing all of a sudden police were just streaming in,” said Kaila Hale-Stern, who recorded the video below. “As I tried to comply with their orders I was shoved to the ground. There were other women being similarly manhandled and as soon as I knew that I was physically safe I was still recording, and that’s when a lot of us noticed that the police were gathered around one young man who was bleeding from the head. We don’t know what happened with that but this was an entirely unprovoked altercation.” 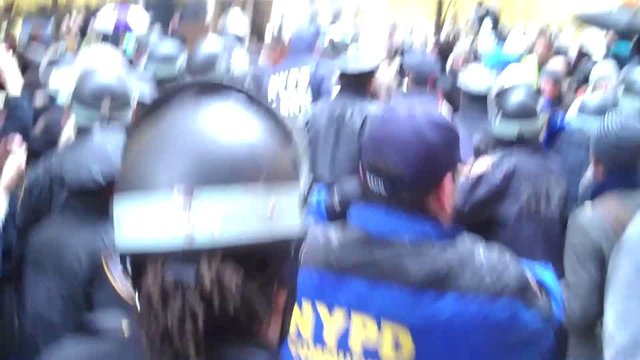