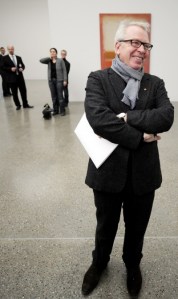 Building Design magazine delivered the scoop of the day today, revealing that British architect David Chipperfield will curate the 2012 edition of the Venice Architecture Biennale. He is the first British architect to helm the event.

Portugese architect Eduardo de Moura, who won the Pritzker Prize, architecture’s most prestigious award, in 2010, was also reportedly in the running for the curator position, according to Building Design.

His art world credits include designing a studio for British artist Anthony Gormley in London, and creating buildings for the Neues Museum in Berlin, the Saint Louis Art Museum and Turner Contemporary, in Margate, England.