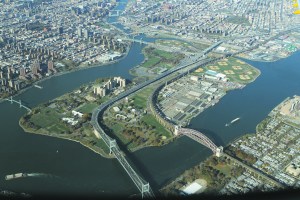 March or May or both?

That is the key question facing galleries that want to participate in art fairs in New York next year, as a breathtaking—some might say absurd—number of art fairs vie for the attention of collectors and art dealers.

After 10 years in London, the Frieze Art Fair announced earlier this year that it was planning to start a New York edition in May 2012 on Randall’s Island—the square-mile piece of land across the East River from Spanish Harlem, which was once the headquarters of Robert Moses.

Since some dealers had been grumbling about the fair’s ostensibly far-flung location, director Amanda Sharp and company must have been very persuasive. For one thing, they have emphasized that the island, which will be home to a “bespoke” tent designed by Brooklyn architecture firm SO-IL, is a mere 15-minute car ride from downtown Manhattan.

The Armory Show—New York’s biggest contemporary art fair—is set to arrive in March, on Hudson River Piers 92 and 94. It has not yet released its list of galleries (it typically waits until January, though Lisson, Sean Kelly, Massimo de Carlo, Boesky and Victoria Miro are rumored to be on board), but it has already said it will trim last year’s total of 274 participants by about 50.

Many galleries that participated in last year’s Armory Show—among them Andrew Kreps, Marianne Boesky and Lehmann Maupin—have signed on for Frieze’s inaugural edition. How many dealers will be willing to do two New York fairs in as many months? That may depend on the prices they are offered for booths.

Meanwhile, the Armory has tapped Chelsea gallerist Edward Winkleman to curate a new section called Armory Films, which will bring a variety of filmic art to a media lounge at the fair. Mr. Winkleman has been a visible video booster for years, and last year launched a video-only art fair called Moving Image during the week of the Armory.

Is Mr. Winkleman worried about being co-opted by the larger fair? “Believe it or not,” he told us on the phone from Miami, “I think Armory and Moving Image are complementary. Last year, about half our galleries did another fair. Moving Image is an opportunity to show your video work at the same time as another fair. You do not have to darken your whole booth. You as the gallery can focus on doing the other fair.”

Which brings us to the messy topic of satellite fairs. Mr. Winkleman told us that the second edition of Moving Image will take place in March during the Armory, and that he expects at least 30 galleries will participate. Why not hold it during Frieze, we asked? “We did the geographical math, and if you are going to Randall’s Island then trying to see Moving Image, it may not happen,” he said.

Like galleries, satellite fairs also have tough choices to make about scheduling. Volta and Scope are sticking with dates that coincide with Armory Week, as they always have, though the Pulse fair has opted to align its fortunes with Frieze, and will operate out of the Metropolitan Pavilion in Chelsea May 3-6. According to Google Maps, that will present visitors with an 18-minute taxi ride to Frieze, without traffic.

So far, Pulse is the lone defector. Despite persistent rumors that the scrappy NADA fair—run by the New Art Dealers Alliance—would stage a New York fair at the same time as Frieze, nothing definitive has materialized, and the clock is running out. In addition, quite a few NADA galleries have signed on with Frieze. Maybe in 2013?