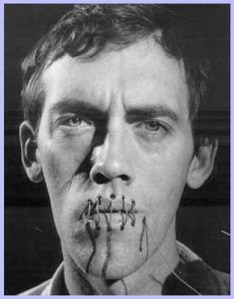 “There has been a blacklist on the representation of sexual differences in American museums,” said Jonathan Katz, co-curator, with David Ward, of “Hide/Seek: Difference and Desire in American Portraiture,” which opened Friday at the Brooklyn Museum. “I came of age in 1989 as an art historian and that was, of course, the year that the Robert Mapplethorpe exhibition was pulled off the wall at Corcoran. Whether I wanted to or not, I found my life’s work immediately politicized. That has haunted my scholarship and the scholarship of my colleagues ever since.”

Press had gathered in the museum’s auditorium to discuss the show before seeing it. Its importance has been overshadowed by the inclusion of a four minute film by David Wojnarowicz, Fire in My Belly, which features images of ants crawling over a crucifix. (One particularly ridiculous example of the public’s outrage comes from kooky Andrea Peyser in the New York Post. She identifies Wojnarowicz as a “former prostitute” and goes on to say “art lovers are such sheep.”) The video has been exhibited numerous times in New York. The Roman Catholic Diocese of Brooklyn asked the museum to pull the video. That didn’t happen.

Still, we were expecting the conversation to be a little more heated (though we also didn’t see Ms. Peyser show up to the press preview). Mr. Katz and Mr. Ward were straightforward enough to deflect most criticism.

“I’m not going to broadly address the controversy,” Mr. Katz said of Fire in My Belly. “I just wanted to make an offer that if I could be of any service to the Bishop of New York in terms of teaching him the iconographic tradition of his faith, I’d be happy to do so.”

The show itself is beautiful; it walks viewers through 100 years of art history. When we entered, the first thing we were drawn to was the sound of Lonnie Johnson singing through a speaker next to an old advertisement for Ma Rainey’s early queer anthem “Prove It on Me Blues” (“I went out last night with a crowd of my friends/They must’ve been women ‘cause I don’t like no men…They say I do it, ain’t nobody caught me.”) Nearby was John Singer Sargent’s Nude Male Standing, featuring a muscular naked man hypersexualized in a come-hither pose.

The poet Frank O’Hara is a strong presence in the later part of the show. He appears first in Jasper Johns’s In Memory of My Feelings—Frank O’Hara 1961, named for the poem of the same name. He reappears in Alice Neel’s reflective portrait, one that fashions him as the archetypal brooding young man and could be used as a book jacket image for Meditations in an Emergency. Next to that is the nearly pornographic O’Hara Nude With Boots, which is just what it sounds like.

The show is heavily geared toward male artists and male representations, which Mr. Katz and Mr. Ward had to address to the media. Because the show focuses on the canon, they said, the presence of female artists was harder to track down in the earlier section of the show. The inclusion of Catherine Opie and Nan Goldin is a pleasure, though it would have been nice to have seen a Lynda Benglis next to Robert Morris’s self-portrait in bondage clothing.

As for Fire in My Belly, which had an entire room dedicated to it, there are many other images aside from the ant-covered crucifix. Shot with a Super 8 camera, there is a bumpy close-up of a man masturbating beneath a strobe light; there are views of Mexican backstreets, where Wojnarowicz shot the film in 1986, spliced with grim front page newspaper headlines; a fire breather spewing flames on a busy street corner; a kind of accidentally eroticized wrestling match is, more or less, the film’s centerpiece. It exists in several versions, an unfinished edited four-minute clip, as well as in seven- and 13-minute editions. When “Hide/Seek” opened at the National Portrait Gallery in 2010, the video was eventually pulled from the exhibition. In all fairness, that is much more of a government institution and the Brooklyn Museum thrives on controversy. That’s not to say Fire in My Belly is a mere ploy to get people in the door–it is, after all, iconic–but it can’t hurt attendance numbers. Why else give the piece its own room? In front of the entrance to the room, by the way, is a sign that reads: “Some exhibitions at the Brooklyn Museum are directed at adult audiences.”