Retired Philadelphia police captain Ray Lewis— whom we profiled yesterday after a video emerged of him giving a speech down on Occupy Wall Street– has been arrested, according the an official OWS press release.

From an email we received from OWS, titled “Thousands Occupy Wall Street; All Entry Points to NYSE Blockaded” (Emphasis their’s):

At least 200 people have been arrested so far for peaceful assembly and nonviolent civil disobedience, including retired Philadelphia Police Captain Ray Lewis. “All the cops are just workers for the one percent, and they don’t even realize they’re being exploited,” Mr. Lewis said. “As soon as I’m let out of jail, I’ll be right back here and they’ll have to arrest me again.”

A NYPD spokesperson was unable  to confirm individual arrests, they did comment that “multiple arrests have been made in relation to the protests” and the charges were still pending.

Fox29 in Chicago was able to confirm the arrest, which happened earlier in the morning. A photo emerged on Twitter, via user @AdamGabbatt, showing Mr. Lewis in dress uniform, arguing with an officer. The New York Observer‘s Emily Witt saw him taken into custody on Nassau and Pine just after 9:00 a.m. 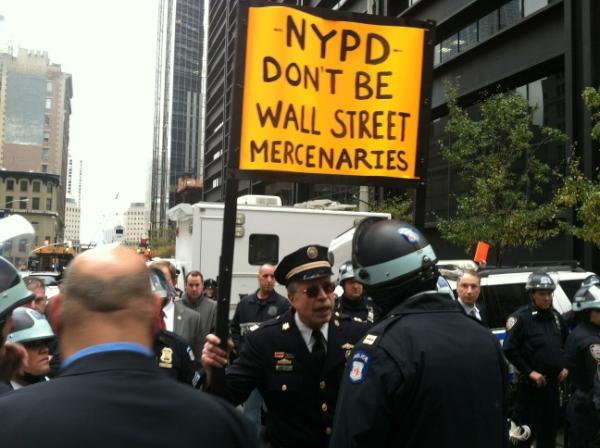