Congrats to Ilana Glazer and Abbi Jacobson, the Upright Citizen Brigade alums whose web show Broad City is now in development talks for an FX pilot. This is no small part due to both the girl’s hilarity and its major endorsement by UCB founder Amy Poehler.

Now, if only there was a way to talk about this show without immediately pigeonholing it as part of the new “Women are funny too!” push on the part of cable programers–The New Girl, Whitney, and 2 Broke Girls all come to mind— while still recognizing these comedians as the growing contingent of recognizable, hilarious female comedians.

…Nope. Too difficult. How about we just watch the trailer instead, which features Ms. Poehler along with NYC comediennes like Andrea Rosen, Adira Amram, and Kristen Schaal?

The series, which chronicles the lives of two 20-somethings living in New York, has managed to fly slightly under the radar despite pulling big guest stars like Kristen Schaal because Glazer and Jacobson have gained their following largely via sites like YouTube and Tumblr. But the announcement may not come as a surprise to fans who remember Poehler’s cameo in the series’ season finale back in May, and the move to TV will certainly introduce their absurd vidchats and frank point of view to a much broader audience.

Yikes. 20-somethings in New York? Vidchats? Tumblr? It’s a fine line between hip humor and another twee Zooey Deschanel project.We are glad FX is finally jumping on the “edgy” train of lady-humor, now that it has moved off the web and has been tested on such other risque networks as NBC, ABC, CBS, E!, and Comedy Central. Good luck, ladies! Don’t let FX Whitney this up! 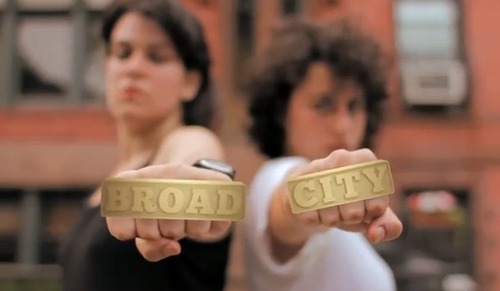