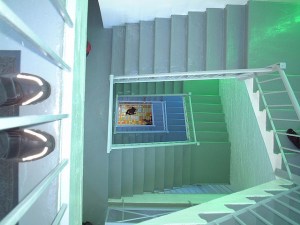 The stairwell of 548 West 22nd Street, with a touch of Flavin. (Photo by kiyoppi7/Flickr)

Today, the Independent art fair announced the galleries that will participate in its 2012 edition, a gang of about 40 participants.  (Hat tip to Artforum for being the first to publish the list.) The fair, which is entering its third year, will take place on March 8-11 in the former Dia:Chelsea building, at 548 West 22nd Street.

Some of Independent’s participants have also signed on for the Frieze New York fair, which arrives in May, like Gavin Brown, Elizabeth Dee, Hotel, 47 Canal and Stuart Shave/Modern Art.

The last remaining major New York art fair that has yet to publish its exhibitor list is the Armory, which has said it will do so in January. As we reported earlier today, it is rumored to include Victoria Miro, Marianne Boesky, Sean Kelly and Lisson Gallery, among others.