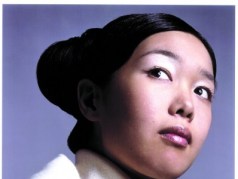 A faded, weathered brick commercial building on West 37th Street with an old and grimy lobby and an entrance that is nearly hidden behind scaffolding is not the kind of place where one would expect to find, tucked behind a large steel door at the end of a hallway on the 19th floor, a large room in which everything—walls, floor, ceiling and each object inside—is a gleaming white.

And yet, here The Observer was, in the Japanese artist Mariko Mori’s studio, and everything was almost blindingly white. An assistant, clashing in black, walked us into a back room where we stepped on a white rug and sat down on a white leather couch across from a white desk with a white computer and a white chair and, behind that, a wall of white shelves with white binders resting on them. The room was silent. It looked out on the back of a brown brick building that—by contrast—made the whole studio feel as though it were under some kind of quarantine.

We imagined what Ms. Mori might be wearing when she appeared. Maybe she would enter the room in all black, or bright pink. Or just a T-shirt and jeans? “Wouldn’t that be something?” we thought.

Ms. Mori entered the room in a white frock with a white shirt underneath. She had on flesh-color tights and white boots. She was so immaculately put together that the small rip on the right leg of her tights just below the knee stuck out more than it should have. She was carrying a white folder, which she laid out on a table in front of us and immediately launched into a description of her latest project. She pulled out photographs of a large-scale installation in a bay off the coast of Okinawa called Primal Rhythm, and showed us a picture of a sun pillar—made of layered acrylic, standing about 13 feet tall and weighing 2.9 tons—perched atop the small Miyako Island with a population of about 50,000. She explained plans for a moonstone, still in the planning stage, that will be about three meters in diameter once finished; it will change color with the tide. On the winter solstice, the sun will line up directly with the sun pillar, which will reflect its shadow onto the moonstone, which will in turn project the rays on the back end of the bay.

“Our current situation,” Ms. Mori said in a friendly voice through a thick accent, “is that we overestimated how much we as a people can control a room.” The echo of a car horn sounded off in the street below, jarring us back to reality. She continued: “We have to remind ourselves to be a part of nature, that we are nature.”

She then called in an assistant, who appeared holding a white iPad. Ms. Mori showed us a four-minute video about the project.

“The light guides us to connect our mind with nature,” Ms. Mori’s voice said in the video as a digital rendering of the project projected on the screen.

About halfway through, the video stalled and the two of us sat in silence while we waited for it to reload.

Ms. Mori has created ambitious, technically sophisticated projects for almost 20 years now, but Primal Rhythm—along with its supplementary digital exhibition at the online exhibition space, Adobe Museum of Digital Media, called Journey to Seven Light Bay, which will recreate the project and shed light on Ms. Mori’s creative vision—is her most epic piece to date. As one of the artists on the roster of Jeffrey Deitch’s now defunct Deitch Projects gallery, she gained a reputation for depleting her dealer’s bank account. Mr. Deitch told The Observer that many projects cost “a million plus” dollars; few if any of them were commercial. Her early works were smart and simple. One called Play With Me featured Ms. Mori dressed as a hypersexualized cyborg, standing in front of a toy store in the middle of a busy street in Tokyo, a reference to her modeling days in Japan in the ’80s. Mr. Deitch proved a worthy producer. The projects grew more and more outlandish. The materials list for 2003’s Wave UFO alone gives some sense of her expanded ambitions: “Brainwave interface, vision dome, projector, computer system, fiberglass, technogel, acrylic, carbon fiber, aluminum, magnesium.”

Now that Mr. Deitch is no longer around to help with funding—last year he became director of the Los Angeles Museum of Contemporary Art—Ms. Mori has created her own nonprofit organization, Faou Foundation. She says Primal Rhythm, which has been in the works since 2007 and requires a crew of local construction workers with a large crane to install, is part of a “life-long” project to create large-scale installations in nature on every continent in the world. She was always a reluctant participant in the commercial gallery system, but by establishing her own source of income and becoming a free agent, she has abandoned the art world completely.

Ms. Mori opened her folder on Primal Rhythm to a section called “Inspiration.” She showed The Observer an image from the Hubble telescope and said she took inspiration from “the history of the universe.” That didn’t really serve to clarify anything.

“Your work,” we offered, “seems to be more critical of the technology it uses than in the past.”

“Not in a cynical way, but you’re talking about the idea of reconnecting with nature. That stands in opposition to—”

“I see your point,” Ms. Mori said. “We’re not in a prehistorical age. It’s not that I’m suggesting going back to what civilization was. I’m suggesting we utilize what we have to help maintain harmony or sustainability.”

Ms. Mori was born in Tokyo in 1967. Her early works were like twisted public art projects; they were largely self-referential and critical of her time in the fashion industry and set in busy corners of her hometown. After her nod to objectification and passive sexuality in Play With Me, she performed Subway. This involved the artist standing in a Tokyo subway car dressed like she had just landed from the future, wearing a complicated costume and basking in the stares of the strangers around her.

With 1995’s Empty Dream, she moved away from simply manipulating her own body, combining the representation of herself as something both foreign and sexual with digital simulation and photography. In photographs, she created an artificial beach in Japan where mermaids live and play among people. The image is eerily natural—Ms. Mori-as-mermaid is simply there among the families spending the day by the ocean, her presence going largely unnoticed.

In 1995, she began working with Mr. Deitch. He helped finance her most complex projects, Oneness and Wave UFO, both from 2003 and about five years in the making. In an essay on Ms. Mori, Eckhard Schneider, the former director of Kunsthaus Bregenz in Austria where the projects debuted, referred to Wave UFO as “a dynamic cultural form hovering at the junction between large-scale sculpture and bio-amorphous architecture.” It is a complex and large piece of sculpture that really does resemble an alien spacecraft. Ms. Mori wrote of the piece that she “avoided visible lines to respect the original idea of form. We searched for a coating that would change color constantly with light.” The audience enters into the structure to find more artwork inside—more alien beings—a kind of self-contained chamber of the world Ms. Mori had created to that point. She believed that the piece was about “humans as collective beings that will unite and transcend cultural differences.”

“She’s in her own place,” Mr. Deitch told The Observer over the phone from his office at LA MoCA. “There’s no artist like her. There’s no person like her. There are very few people who combine science and art and engineering the way she does. We’ve done extraordinary things that after it’s done, it just feels like a miracle that it happened at all.”

If Ms. Mori’s other projects represented a developing imaginary world filled with aliens and sex robots—all meant as a way of progressing toward inner peace—Primal Rhythm and Journey to Seven Light Bay is about implanting this imaginary world into reality. The project is the grandest outlet of Ms. Mori’s vision, but strangely also the most down to earth. The work still looks like an alien spacecraft that has fallen out of the sky, but it is about the environment surrounding it—the sun pillar and moonstone exist for the bay they are placed inside of.

The earthquake and tsunami that hit Fukushima this year were a wake up call for Ms. Mori. She came to realize that, as much as a person can think she is in control, there are still things far more powerful that cannot be helped. Ms. Mori postponed Primal Rhythm out of sensitivity for the natural disasters. The project is a way of grasping at a serenity that has always been hinted at in her work, but there was something almost funny about it before. The radical otherness was presented satirically, with Ms. Mori interpreting isolation only by fashioning herself as a creature from another planet. Inner peace was the project of aliens and robots. This new project—part of her so-called life’s work—comes off as dire, more of a necessity. In conversation, she would not mention the earthquake explicitly, referring to it instead as “what happened.”

“Was the earthquake in Japan this year very important to you?” we asked.

She responded with a quick and formal “Yes.”

“It seems to be important for this project as well,” we ventured.

“Yes,” she said in the exact same way as before.

She smiled cautiously and we both fell silent. The Observer turned off his recorder and thanked her. There was another moment of silence before Ms. Mori spoke up: “We have the technology to not have nuclear power plants,” she said. Her voice had more authority than it did before. “What happened was devastating, but we can move on. We have to move forward.”