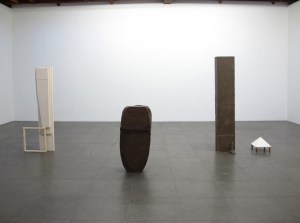 Installation view of Esther Kläs, "Nobody Home," at Peter Blum

It’s theology that looks like a math problem: Is it possible for a wall to have only one side? In her first solo show in New York, at Peter Blum Gallery, the sculptor Esther Kläs’s answer is yes. Using sheets of two-inch Styrofoam to build up monolithic forms, and Aqua Resin dyed in a postwar German palette of cement grays and morbid dark grays, she molds the mysterious, axiomatically impenetrable outsides of things.

It’s also psychology that looks like urban planning. All In, the largest piece, consists of four separate sculptures arranged in the form of a long, narrow city, like the Manhattan skyline seen from a studio in Brooklyn; but they can also look like a silent, newly discovered tribe posing for an anthropologist’s daguerreotype. The six-foot-tall white monolith on the left, molded around three sheets of Styrofoam that Ms. Kläs shaved down progressively from a slightly irregular rectangle in the back to an ironing-board shape in the front, rests on an empty square wooden picture frame. The taller black monolith on the right is simply rectangular, but it’s marked with horizontal seams where its separately molded components were put together. Bits of plastic extrude as on a cheap toy soldier. At the bottom, a casting of the artist’s own left hand emerges to hold the piece upright; to its right, a tiny white pyramid stands on peglike wooden legs salvaged from a chair.

The ego in this scenario is a shorter, black structure shaped, roughly, like an almond and leaning slightly. A horizontal seam marks off its top third and then ascends the sides diagonally, like a jawline, to mark out either a blank face or the vent of an exhaust chimney. (Think of Solaris making an Ewok.) Visible in the seam are the taut, overlapping, white plastic lines of the mesh the Aqua Resin is layered on.

Hero, Heat, Halo, meanwhile, is zoology that looks like Bible study. Thirty stacked sheets of Styrofoam have been cut steeply into rising steps, and molded in blackish resin, with a separate stack jutting out to one side and the back resting on four more repurposed wooden legs. The end result is a termite hill, butte, piano or Tower of Babel exactly five feet high. Cultural acts are difficult to understand without direct experience. We can see the forms, but we can’t understand what makes them work without participating. They live according to an unshared logic; like animals, they refuse to speak.

Trouvé, a broken rectangle of molded concrete, one corner partially dyed with purple and yellow pigment dust, lies on the floor, but isn’t really flat; if you stand at its foot and look down at it, the sensation is of looking up. Du auch, a six-foot-tall dark gray monolith thicker than the constituents of All In, expands as it rises and leans like Rodin’s Balzac. HA is a set of three croquet wickets imagined as person-size doorways, leaning against the wall; and Held, the only piece hanging on the wall, immortalizes the artist’s arm, without its hand, in a plaster cast mounted on plywood, under glass. (The incongruity of the severed arm brought to mind a jar at the College of Physicians of Philadelphia’s Mütter Museum labeled “Piece of John Wilkes Booth.”)

Ms. Kläs sometimes creates texture by working clay over her Styrofoam armatures, and even when she doesn’t, the precise roughness of the network of seams creates a fully realized surface. But the minimal shaving down of the industrially generic Styrofoam rectangles means that forms are suggested but never revealed. What this is, in fact, is Martin Buber in the guise of Sigmund Freud.

“Cory Arcangel vs. Pierre Bismuth” is a collaborative duel at Team Gallery consisting of three works by each artist chosen by the other.  (There is also one piece they created together: a full-scale appropriation of Guy DeBord’s black and white film Society of the Spectacle on top of which a blinking, pixillated, blue and yellow “CHANGE BULB” message has been superimposed.) Mr. Arcangel and Mr. Bismuth thrust and parry back and forth, but not very far back and forth, along the endlessly renewable but ungiving and unforgiving line between jokes about jokes and jokes about nothing.