Mayor Jeff Jones’s 2014 re-election chances may hinge on what happens Wednesday night in Paterson when the city council conducts hearings into the Jones administration’s distribution of Hurricane Irene overtime pay.

“The answers are not only for ourselves but for our constituency,” said veteran Councilman Ken Morris, Jr. “There are some management control systems that are not in place or severely broken that allow salaried overtime to occur. There are no checks in place and also ambiguity to the process by which overtime is approved.”

During the flooding crisis in the aftermath of the August hurricane, the $119,000-per-year mayor and top members of his administration received over $20,000 in overtime pay (The mayor’s cut was $6,144). Morris and his council colleagues said that was unacceptable, particularly given the city’s last budget, which contained a 29% tax increase, and the prospect of another 17% tax increase looms with the coming budget.

Never in the history of Paterson has a mayor received overtime, Morris said.

Jones told the council his administration conducted its own internal review and denounced the governing body’s insistence on drilling into the matter publicly.

But Morris said only through a public inquiry can the city take corrective action.

“It’s not the council that vilified the mayor – it was the public that called on the council to look into this,” Morris said. “This is not a witch hunt. This is an inquiry.

“We not only have a responsibility to help mitigate burdensome property taxes, but it has to be done in a public and transparent way,” Morris said. “Absent doing this in public, the outcome won’t be effective.

“Our investigation may turn up no reasonable wrongdoing on the part of the mayor but folks have to be aware,” the councilman added.

Of the sitting council people, only Assemblyman-elect (and Councilman) Benji Wimberly – a close political ally of the mayor’s – refused to censure Jones and vote to move ahead with the inquiry.

“Elected officials don’t punch a clock, we work around the clock,” said Councilman Andre Sayegh, who vied for the mayor’s job and lost to Jones in 2010. “Mayors don’t submit time sheets for compensation. Rudy Giuliani didn’t receive overtime compensation for 9/11. It’s not appropriate.”

Sources close to the mayor worry about the further tarnishing of a one-time rock star prospect, mayor of the state’s third largest city. Even if the council uncovers no wrong-doing, it is unlikely anyone will want to be affiliated with Jones next year in time for ward council races in the city, a key source said.

Jones’s critics say the overtime episode was only the latest in a string of mayoral missteps that started when Jones assumed the oath of office last year after defeating two-time incumbent Mayor Jose “Joey” Torres.

Four sources say the mayor’s first wrong move was not diversifying his cabinet to make all of Paterson’s key communities a part of his leadership. His second fundamental mistake was sweeping most of the two-term talent out of City Hall, creating a brain-drain from the outset.

Complaints continue that the mayor believes “he’s the smartest man in the room,” “who won’t listen.” At least two recall efforts are under way in the city, according to sources. 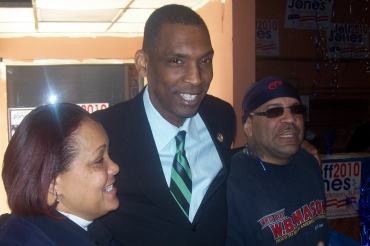