We were trying to make our way down 5th avenue this afternoon when traffic was literally stopped for ten minutes on 46th street. We paid our cabdriver and walked into the throng of people outside Barnes and Noble. Was it some sort of Occupy Wall Street protest of giant book corporations?

No, just two of the lesser Kardashians.

As people spilled out into the traffic, we tried to get a straight answer on who they were waiting out in the rain for.

“Kim Kardashian is in there!” a young woman with a blue umbrella gushed at us.

Really? We thought she was in Australia.

“It’s not Kim, it’s the other two,” an older lady said, leaning in conspiratarolly. “Khloe and Kathy.”

“What book are they signing?” we asked.

We waited around ten more minutes as the throng of human bodies pulsed around the entrance. We Googled “Khloe and Kourtney Kardashian,” because we were pretty sure there was no one in that family named Kathy.

It turns out the dynamic duo (?) were out promoting their new novel Dollhouse. Kim Kardashian also wrote it. So we guess that answers the question “How many Kardashian sisters does it take to hire a ghostwriter?” (The answer is, of course, all of them.) 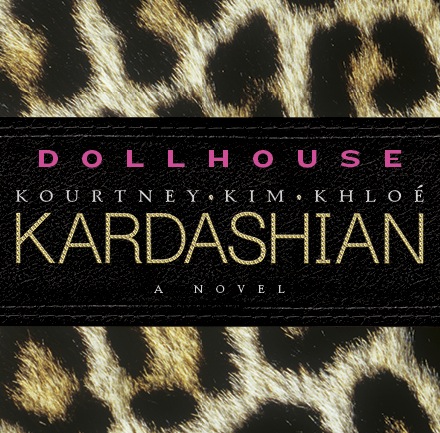