Shortly after Codey suffered the humiliation of his caucus turning against him under the pressure of South Jersey, he knew his best chance of regenerating power was to establish himself in opposition to the triumvirate of Gov. Chris Christie, South Jersey Democratic Leader George Norcross, and Essex County Executive Joe DiVincenzo.

Taking a hard stand against that trio’s public sector pension and benefits reform package, he also defended his mental healthcare initiatives against the governor’s cuts. The fact that he was unsuccessful on these battlefronts didn’t count as much as having made the fight and further sharpened himself as a counterpoint.

When his enemies made their best efforts during the redistricting process to redistrict him into a Republican district, he had insiders of his own pushing back enough to land him a more difficult – but still eminently winnable – landing pad.

Codey seized on his new district to demonstrate his ability to build a base of support within the Republican Party, as a roster of nearly 20 elected and former elected officials embraced the Democrat as their candidate of choice in the LD27 Senate contest.

Last Tuesday he won by a landslide, and a day later, he appeared on the front page of the Star-Ledger with his wife and state Sen. Ronald L. Rice, (D-28), Newark as the definitive face of a resurgent Democratic Party.

Based on the issues and the merits, many Democrats consider Codey the most substantial challenger to Christie.

To be sure, he would face challenges, most significantly in a Democratic Primary, where his old nemeses, Norcross and DiVincenzo, would likely stand behind an alternative ticket and be working overtime to ensure his defeat. In a general election, Codey would have the additional hurdle of having been in legislative office for nearly four decades, giving Christie a chance to easily define the Democratic challenger as one of the most identifiable originators of New Jersey’s economic downfall.

Pre-election, Sweeney faced legitimate questions about whether he could even maintain control of his own county, let alone dream of bigger conquests.

In 2009, Gloucester County voted for Christie over incumbent Democrat Jon Corzine. A year later, Sweeney’s freeholder candidates lost to Republican challengers. In order to muffle opposition jeering about the untidy condition of his own backyard, the Senate president was going to have to make a statement.

He did, as the incumbent freeholders he backed all won, even though the GOP pointed out that he needed to dump a huge amount of money into the contest to be sure of the outcome.

But Sweeney’s potential handicaps as a challenger to Christie have always gone deeper than the mechanics of his own political machine.

To date, his most serious complication as a viable general election opponent to the Republican governor is Sweeney’s history of agreement with Christie on critical issues. Even if it’s not fair, it’s true. As he himself said last week in the aftermath of the election, Sweeney espoused several key initiatives (most significantly, pension and benefits reform) before Christie landed in Trenton and agreed with him. Sweeney’s natural big-labor project advocacy in the case of Revel, the American Dream and the Bayonne Bridge also matches that of the governor.

It all may be good government level-headedness and reflective of Sweeney’s no BS bipartisan ability, but in a true fistfight with Christie, some insiders say Sweeney’s history here – notwithstanding his efforts to level a millionaire’s tax over the governor’s wishes – doesn’t give him the ability to turn a general election into a real brawl.

The departing Senate majority leader defined herself as a Christie (and, in many cases obviously Sweeney) opponent on key issues, including pension and benefits reform, deregulation and executive privilege.

Perceived as too much of a critical thinker and not loyal enough to the Democratic Party power players, and deprived of her own power base in a divided, boss-less Middlesex County, Buono had to step down from her leadership post last week.

Insiders say her toppling did little to abate the senator’s desire to continue fighting the existing power structure that includes Christie and key Democrats.

But at this point it will be difficult for Buono to forge organizational support toward a bid for governor.

Insiders speculated for months that if Norcross and DiVincenzo’s alliance with Christie continued and Christie’s job approval remained intact, Buono would be the Democrats’ perfect 2013 organizational sacrificial lamb.

Now, following her backroom political decapitation at the hands of those bosses who might have at least pretended to support her, it is unlikely that Buono will be able to even muster apparent organizational support.

If Codey decides to run, she would be deprived in a primary of those counties – including Hudson, Passaic, Essex, Bergen, Middlesex and Morris – that Codey has the potential to land through relationships with party chairmen and others in those critical party strongholds.

That leaves Buono with pieces to run with, including women, suburban progressives, Blue Jerseyans and scraps of public worker support depending on her ability to outhustle Codey.

The buzz around the mayor is he’s more ready for a deliberative body job than another term on an executive throne, especially when the incumbent governor is a friend, in agreement on significant issues, and the beneficiary of many of the same financial backers.

But Booker’s star power and considerable fundraising capacities remain intact, and powerful Democrats believe that if Christie is vulnerable in 2013, their best, clear-the-primary-field candidate would be the mayor of Newark.

An undercurrent of Democrats – including prospective 2013 combatants – just as quickly point out that for all his good intentions, Booker hasn’t put the culture-changing footprint on the pavement in Newark and would struggle to make the success case for the rest of New Jersey.

Still, sources say Booker would be the candidate most capable of landing key organizational backing built on a combination of money and influence.

His accelerated activities this past campaign cycle more than suggest his ambition to be a statewide player. Again, most insiders think he’s angling more for the U.S. Senate than governor, but the mayor’s infrastructure gives him the option of one or the other depending on the political weather.

Like Sweeney, he could face the general election hazard of having – at least to date – no deep, discernable point of contrast with the Republican governor.

There’s every indication that the Middlesex County assemblyman is one or two moves away from being an obvious candidate for governor in 2013.

First of all, he’s everywhere.

As chair of the Democratic Party for the past two years, Wisniewski has proved himself unafraid to attack the governor and stay in contact via regular email communications with party members.

He is organizationally wired into South Jersey, w
hich carries both an up and a downside. The positive is he might be able to land the support of the powerful regional organization. The downside is if part of his statewide primary plan relies on South Jersey, he could get boxed out by a Booker, Sweeney or U.S. Rep. Rob Andrews and face the prospect of going to war in his own divided county for support.

But whatever his organizational hurdles, even Wisniewski’s fiercest critics don’t deny his intelligence and competence and his ability in the wake of a popular state party chairman in Joe Cryan to put his own imprint on the job in difficult times dominated by Christie.

Insiders who back the assemblyman for governor argue that he would present the best onstage contrast to Christie, giving voters a sharp, Michael Douglas contrast visual.

As retiring chairman of the budget committee, Greenwald has the best bullet points ingrained in his brain, and would relish a chance to go up against Christie in defense of past budget practices and as a critic of Christie’s cuts.

He has South Jersey organizational support, but like Sweeney and others, would have to wait in line to secure that support, and he may not be there yet, insiders say.

Greenwald also has the capacity to make his own individual case for North Jersey backing, above and beyond the obvious enduring alliances of Newark North Ward Democratic leader Steve Adubato, Norcross and DiVincenzo.

At an Adubato event earlier this year, Greenwald made a point of playfully going toe-to-toe with Adubato. He also has friends in Hudson County.

One of the 21st Century’s most puerile inventions, Twitter turned into a delivery system of substance in the hands of Bollwage, who focused less on informing the world of his daily routines than on the Christie administration.

Bollwage defined himself as the state’s authority on UEZs (Urban Enterprise Zones) and transitional aid, and proved eager over the past two years to pick apart the Republican governor on those issues.

In the process he triggered interest among Democrats tired of Christie pushing them around and in search of a street fighter.

Mayor of Elizabeth for two decades, Bollwage has a good local reputation.

He also faces the re-election war of a lifetime next year against an aggressive local political organization  called the Elizabeth Board of Education.

A smart policy wonk who is a legitimate progressive capable of exciting leftward-leaning audiences, Pallone could provide the credible counterweight to Christie on a debate platform;

He is the richest congressman in the New Jersey delegation;

The redistricting process with political enemies allied against him could leave him on the losing end and in search of a contest beyond the 6th District.

Sources close to the process say the last of these arguments is unlikely to prove true, as the congressman occupies a congressional district unlikely to get chopped.

He wanted governor, then he wanted senator, at both times to no avail.

Based on the evidence of his past ambition, it is easy to picture Andrews – under the right circumstances – launching a run at a time-diminished Christie.

But his built-in political base in South Jersey has never translated statewide, and if he runs he would need more than the help of Essex County and a few scattered support groups to get through a Democratic Primary. 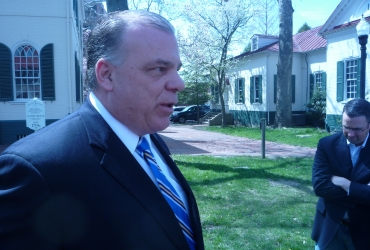