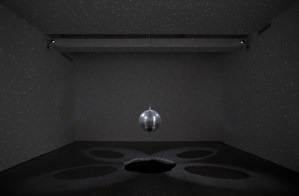 When you walk into the gallery on 21st Street, the first things you see are three gray boulders all leaning, like modern dancers, to the right. The knife-peaked central stone is parenthesized between two deftly split halves, one with a heart of copper, the other with a heart of gold. But when you begin to circle, you find that the piece actually comprises four boulders in a cross, each one sheathed, where it faces in, with molded stainless steel painted in lacquer. The blue and lavender sheaths point up, and the yellow and copper sheaths point down, and the shiny surfaces are broken up as the steel follows the dimpled stone, so that the reflection of your face, if you can find it, appears to have a wavelike motion.

Upstairs are five scratched and incised seven-foot-by-five-foot color photos of cloudy skies, two ruddy in sunset, the rest more or less shadowed shades of metallic blue. The scratches are at once hastily drawn and carefully placed: there’s little sense of the artist’s controlling hand in any one white line, but the total effect—a net, an oracle bone, a shape like a diving fish—is, if anything, too considered.

The wall pieces at Gladstone Gallery’s 24th Street branch are stronger: five separately hung segments of a 12-foot circle, covered in tesseras of black mirror, inscribed with stars and crescent moons. In the back of the space, a disco ball hangs from a thick steel wire over a large hole raggedly jackhammered into the concrete floor. The hole is filled with , and the dyed with ink; the disco ball sinks down into this pool, submerges completely, and rises up again during a nearly hour-long cycle. Four computer-controlled lights in the room’s upper corners follow the ball as it rises and falls, slowly spinning, so that it casts bright snowflakes of light across the ceiling, floor and walls. At one point, when the ball is low, four white ovals with black centers of shadow spread out from the like flower petals; and then they rise up the walls, in concert with the ball, like eclipses. The is flush with the floor when the ball is submerged; when it rises, a few drops cling to its glass; and when these drops fall back down into the pool, it’s hard to see the shimmering in the black surface of the , but you can see it reflected in the bottom of the globe.

Delicacy of conception would seem unlikely to hold its ground here against showiness of execution; but this particular delicacy is surprisingly robust. Polished surfaces consistently throw off conventional attempts to connect, whether intellectual—analyzing the disco ball’s meaning—or emotional—trying to feel what the stones feel, rather than what they make you feel. But over time, your eyes adjust, so that if you’re patient, you can see through the mirrored surfaces to the depths.