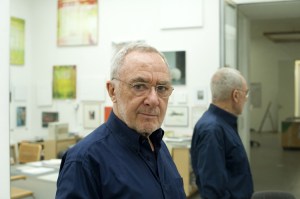 An excellent essay on painter Gerhard Richter that asks, according to The London Review of Books‘ Twitter: “Gerhard Richter: petit bourgeois nihilist?” [LRB]

A 5,000-square-foot installation by artist David Brooks will soon be coming to 46th Street and Eighth Avenue, not far from The Observer offices! [Inside Art]

Here’s a review of the new and improved New York Historical Society. [NYT]

Report: Bravo will sell reproductions of the art from Work of Art immediately after each show airs. [In the Air]

Chilean painter (and father of Gordon Matta-Clark) Roberto Matta was born on November 11, 1911 (that is 11/11/11), and would have turned 100 today. Peter Schjeldahl once succinctly described the elder Matta as a “surrealist, womanizer, and not to put too fine a point on it, jerk.” [@Artnetdotcom]

Tracey Emin says she is happy being single. “I do miss sex,” she told a reporter. [The Telegraph]

“Just as good as it promised to be.” Martin Gayford on Leonardo Da Vinci at the National Portrait Gallery. [Bloomberg]

A nice, tough review of Sherrie Levine’s current exhibition at the Whitney, from Roberta Smith. [The New York Times]