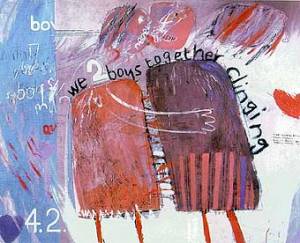 "We Two Boys Together Clinging" (1961) by David Hockney. (Courtesy the artist)

Martin Gayford, chief art critic for Bloomberg Muse, has written a book about David Hockney that focuses, at least in part, on the artist’s iPad drawings. [Bloomberg]

On the difficulties of marketing Jesus at the Detroit Institute of Art. [Detroit Free Press]

Fans of the ultra-violent sport known as ultimate fighting argue that it is “a form of art protected by the Constitution.” An Albany assemblyman disagrees, telling the paper, “You know art when you see it and you know that this is not art.” [New York Daily News]

After three years on the job, Douglas Fogle, chief curator and deputy director of exhibitions and programs at the Hammer Museum, said that he will resign in February. Mr. Fogle plans to pursue independent projects. [Artforum]

Artist Ai Weiwei said that he will use his ongoing fight with the Chinese government over allegations that he owes $2.4 million in unpaid taxes to expose government corruption. “We can use this as a chance to make the world understand what kind of system they are working with,” Mr. Ai said. So far, the artist has received $1.4 million in donations to help him cover the tax bill. [AFP]

Sculptor Tom Otterness may lose his commission for a work in San Francisco because of a video he shot in the ’70s of him shooting his dog. [San Francisco Examiner]

Ann Wintour, Sarah Jessica Parker and Karl Lagerfeld were among the attendees to last night’s gala for Pedro Almodovar at MoMA. [Hollywood Reporter]