TRENTON – The demands are familiar to anyone following grass-roots movements such as Occupy Wall Street: Improve the national economy and enable the middle-class to once again pursue the American Dream.

And MoveOn.org’s rally outside the Statehouse on Thursday was no exception, featuring a litany of policy goals:

*investment in a jobs plan that concentrates on rebuilding the country’s infrastructure;

*Raising more revenues for Social Security by lifting the income limit that is capped;

*Instituting a financial transactions tax that would discourage “reckless” investment decisions and speculation;

*Setting up a Medicare-for-All type program;

*Support of the millionaire’s tax at the state level;

*Bring the troops home from war-torn countries where billions of dollars of taxpayer funds are being spent.

The rally in Trenton, attended by some 100 individuals who braved the cold, drizzly and windy weather, was one of 400 “Day of Action” events held around the country.

Supporters held up signs, reading “Cut the job deficit, invest in people,” “Create jobs for the middle class,” and “Hands off Social Security and Medicare.”

The activists said they were in solidarity with the thousands of “Occupy” movements across the country that are putting a spotlight on corporate greed and income inequality.

“It will only grow stronger,” said Susan Gaissert of the American Dream Movement.

“We are the 99 percent. We want economic justice. We stand in solidarity with the Occupy Movement.”

Some at the MoveOn.org rally expressed disappointment that the number of participants at Occupy Trenton could be counted on both hands most days.

Sounding a little like J.F.K., one speaker, Tom Bias, 61, of Sparta, said, “Hey billionaires, ask not what your country could do for you…”

As organizer Mark Rothmel told the crowd, the time has come for the wealthy to pay back the favor.

Ed Wittman, 55, of Trenton, was blunt in expressing his disdain and wanted to look at in context.

“What you have here is a small percentage acting as a parasite on the large percentage,” he said. “These people think they’re so above us they can ignore the larger landscape.” 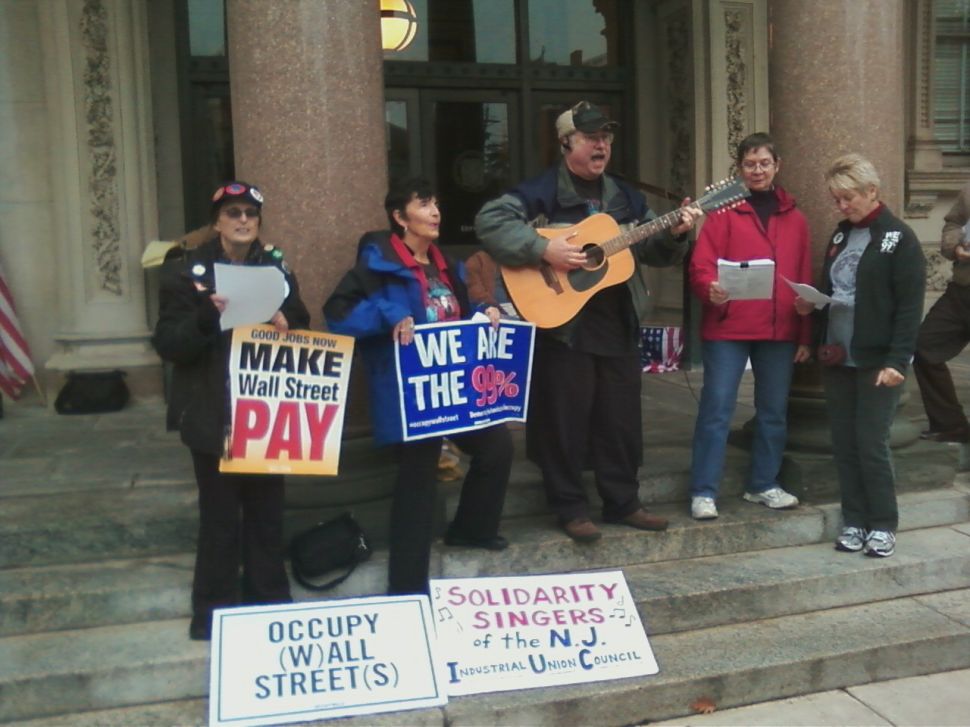