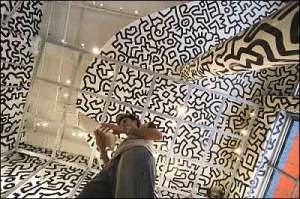 How’d we miss this? The New York Times review of the first show at the newly renovated New York Historical society notes in passing that the new building features part of the ceiling from Keith Haring’s “Pop Shop.”

Pop Shop, of course, was the name of the store on Lafayette where the artist sold his designs and memorabilia. There were two locations, the one in Soho and another in Tokyo, and both featured murals in Haring’s signature style that covered every surface.

The New York shop closed in 2005 and a New York magazine story about the closing featured Amy Cappellazzo dismissing the notion that the ceiling would ever be sold, saying, “I hope it has a life in some place like the New-York Historical Society.” Always ahead of the curve, that Cappellazzo.