How does that saying go? First they laugh at you, then they compare you to Nazis, then they tell everyone you are selling drugs and acting like criminals, then they show a dubious video where a crazy person gets beat up by an angry Turkish man for kicking his tent down, and then you win?

So take heart, Occupiers. The New York Post‘s ridiculous coverage of your seedy, criminal underbelly is starting to make you guys look good in comparison.

For anyone who missed it, today’s  New York Post included an article called “Deranged homeless man goes on violent rampage in Zuccotti Park.” The video, which isn’t embeddable, is a doozy: a dreadlocked young man, practically foaming at the mouth, is kicking down tents around the parks perimeters early in the morning in a “Godzilla-like rampage.” Eventually he gets a response: a Turkish man named Recai “Rocky” Iskender emerges from his tent and wrestles the man to the ground before the first guy is dragged away by volunteer EMTs.

There are several issue with the video that raises questions. Like the fact that this man –who is identified as Jeremy Clinch— talks directly to The New York Post cameramen while kicking the tents, or that it apparently happened so early in the morning that no one else was awake to capture video from another perspective. We’re not saying Mr. Clinch is a plant (he was confirmed by another OWS member to have been in the park since the beginning), but he definitely seems egged on by the cameras into provoking another Occupier to fight him. Voila: Occupy Wall Street is a super-violent place and no one can say any different.
Equally shady is how derisive the Post is of Mr. Iskender, as if being kicked awake in the morning by a mentally ill person and having a camera shoved in your face should be reason enough for a major newspaper to question your motives.

In a bizarre rant after the dust settled, Iskender told The Post that Clinch “is a police agent.”

“He is a Bloomberg agent, disturbing and disrupting the protest,” said Iskender, who after the fight donned a message board that read, “USA-Turk Army Ended My Diplomatic Career 6 Times,” and also charged that “AC Tropicana Casino Robbed My $30K Pay For My Driving Job.”

If you actually watch the video, Mr. Iskender first told the New York Post that the man was mentally ill, before speculating that he was planted by the police or Bloomberg, which the cameraman for The New York Post jumps on like a hungry hippy during a Seitan buffet. “Oh, he’s planted by Bloomberg?” Do go on…
Occupy Wall Street has shown itself to be a somewhat dangerous place. But The New York Post‘s  effort to create (or escalate) a situation to fit their narrative has the opposite effect: it’s the paper that ends up looking confrontational and totally paranoid…not the protesters. 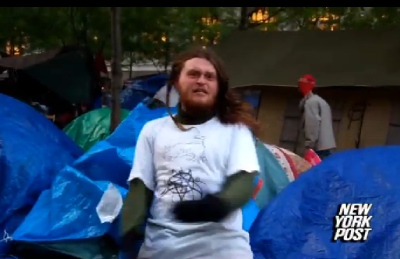