Now that the Christmas season is upon us, Governor Chris Christie is calling for the end to class warfare. Specifically, Christie is demanding that Santa Claus scrap his traditional list of who has been Naughty and who has been Nice.

“The tax policies of this state are driving the Naughty away,” said Christie.  “If only the Nice get gifts this Christmas, you’re going to see a faster exodus of the Naughty to Pennsylvania, along with the dollars they spend in New Jersey.”

“Santa should not be punishing the Naughty for being successful,” continued Christie.  “The Naughty took the risks and pulled themselves up by their own bootstraps.  With the gifts, the Naughty will in turn use those presents to hire more of the Nice.”

The North Pole has been tepid in its reaction to Christie’s tinsel trickle-down policies.  “With all due respect to the governor, we don’t celebrate the holiday with good will to Short Hills,” Santa said.  “The Nice make up most of the state, and the gifts are part of the safety net that keep working families afloat.”

Christie has been a relentless critic of what he calls Santa’s exploitation of the Nice’s anxiety about the economy.  “If Santa continues to pass out gifts with no strings attached, we will see a faster erosion of our country’s independent work ethic and ingenuity,” said Christie.  “Do we want a generation of young Americans growing up simply expecting presents every year?”

Some legislative leaders have been muted, even reluctantly supportive in their opposition.  “I grew up in a climate where the Nice worked hard and were valued,” said Senate President Stephen Sweeney, “but the expectations among the Nice have gotten out of hand.  We simply have to recognize that the Naughty also make contributions to society and should not be excluded at Christmas time.”

“For years we have recognized the needs of the Nice, but they have become too comfortable” said Senator Loretta Weinberg.  “Especially in a weak economy, we need to take a stronger look to Government-Naughty partnerships for investment.” 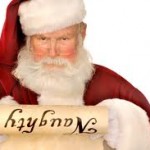