No, this is not an Onion headline: Occupy Wall Street’s Denver branch has responded to the nation’s questioning of a “leaderless” movement by nominating Shelby, a Border Collie mix, as the face of their revolution. Now Shelby is “demanding” a meeting with Governor John Hickenlooper, during which we gather that she will bark out a list of demands that are slightly more comprehensible than anything else OWS has come up with.

See, we get that Shelby the dog is a jokey statement for Denver’s protesters, but Fox News is going to have a field day with this one. On the other hand…aw, puppy! (Not to mention Border Collies are known to be the smartest breed of dog and have yet to ever incite a riot, complain about the price of their liberal arts degrees, or suggest that we should switch our national currency over to Time Dollars.

In the meantime, we are waiting for Occupy Oakland to nominate a half-starved pit-bull/Doberman mix rescued from Michael Vick‘s house as its representative to meet with city officials. 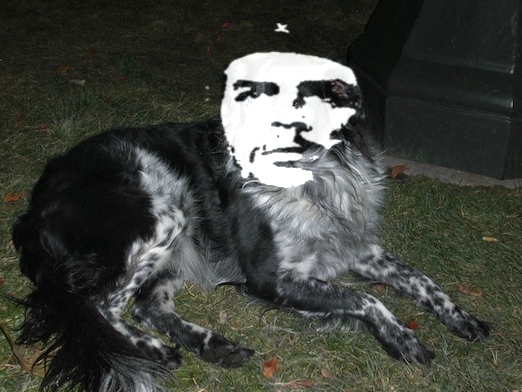