First there was the human microphone engagement. Today it was a Muslim wedding. Let’s hope the next step is not a Occupy Wall Street divorce court.

Emery Abdel-Latif, 24, and Micha Balon, 19, joined together in holy union this Sunday afternoon, one month after meeting each other at the protest. (They were both trying to find a place to pray in the overcrowded park.) The wedding took place in Zuccotti’s “sacred space”–located on the corner of Trinity Place and Liberty, across the street from the Burger King– and was presided over by one of OWS’ several chaplains, though the ceremony itself was a traditional Muslim service.

Why would anyone get married in NYC’s premier tent town? As the blushing bride told the New York Daily News, “We met here and it’s cheap. We don’t have to pay anything.”

That may sound flippant, but considering that booking a location for a New York wedding can take months (and sometimes years) of advance notification, Mr. Latif and Ms. Balon’s quick turnaround time on executing a small outdoor service will turn the rest of the city’s brides-to-be absolutely teal with envy.

Not to mention the cash factor: while Fox is reporting on couples who lost thousands when their perfect outdoor wedding was ruined by Hurricane Irene, OWS’ kitchen didn’t even charge a catering fee. Sure it might not have been the lavish engagement that some dream for, but what yesterday’s ceremony and reception lacked in frills, it made up for in its lack of bridezillas, overbearing relatives, dress fittings, flower arrangements, wallet-gouging prices, and months of migraines. Plus? Free tents in case it rains and the added bonus of being able to use your nuptials to make a statement about America’s crappy economy. And what little girl doesn’t dream about the possibility of Michael Moore or Jesse Jackson showing up on her special day?

So is Zuccotti Park the new hot spot for tying the knot? That probably depends on how much you are willing to piss off your parents and future in-laws. But if you’re down with simplicity and carrying the message (or were planning to elope anyway), why not make a statement and hold a 99%-themed wedding down at Occupy Wall Street? After all, that’s one way to get your marriage in the paper without having to pay for it in The New York Times‘ weekend section.

(Photo via Josh Harkinson, who also has some great images of the ceremony.) 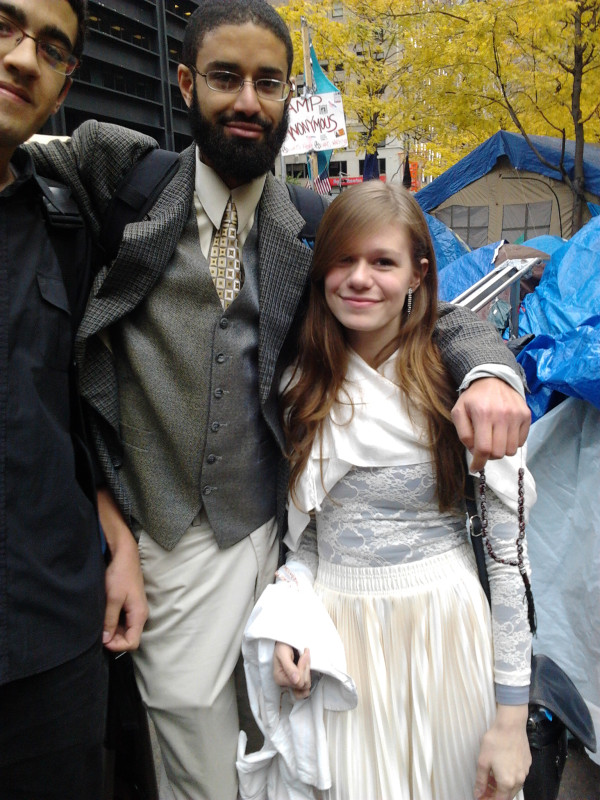