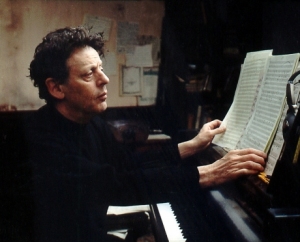 At the last minute yesterday we heard Philip Glass was playing in the atrium at the Museum of Modern Art as part of Carlito Carvalhosa’s exhibition “Sum of Days.” For that show, a large, white, somewhat translucent sheet of fabric hangs from the ceiling, rigged up with a system of microphones that records the day’s noise in the atrium, and then plays it back the following day through speakers. The fabric dangles in a kind of coil and guests walk inside it, following its curve to the center and then back out again.

We walked to the center to find a grand piano, a woman pouring from a bottle into a glass and resting it on the piano’s bench, and a stern looking security guard. We figured we would wait for Mr. Glass to arrive and watch him in quiet serenity about three feet away from his hands moving quickly over the 88 keys. After about one minute of standing silently and trying to avoid the security guard’s authoritarian gaze, he coughed, we looked and he gave a swift motion with his hand telling us to move on. We could listen to the performance outside the fabric he said.

We never actually saw Mr. Glass, but from a bench situated just outside the fabric we could hear him. He began playing an arpeggiated melody that sounded like the “Opening” section of Glassworks. It was sad and slow. Only Mr. Glass can make a quick arpeggio feel like a funeral dirge. The sheet of white fabric moved around with the air in the room and was brushing up against the audience’s faces. Through it we could see the faint silhouette of the grand piano and a head curved downward, following the movement of a pair of hands across the keys. Babies were crying and people were talking and that constant white noise one hears in large open spaces—it sounds like a distant shuffling of feet—was competing with Mr. Glass for everyone’s attention. The music felt less like a performance and more like a soundtrack playing softly beneath a scene of dialogue in a film.

Mr. Glass was joined by violinist Tim Fain. It was difficult to hear him behind the white sheet and he must have known it. About halfway through, he stepped out and revealed himself: he was young and boyish, wearing jeans and sneakers. He began playing—he had no sheet music—alternating between choppy scales and long drones. He seemed to be attacking his instrument with his bow, an intensity that was contradicted by his hopping on the balls of his feet as he played, not to mention the occasional smiles he flashed at the audience.

The diehard Glass fans in the room were easy to point out: A bald man with glasses had his head arched up toward the ceiling and his eyes closed; A woman sitting against the far wall clutched her head and stared menacingly at her feet; a man in flannel with a large beard turned to the two women having a conversation next to him and shushed them with pure rage in his eyes.

We could see part of Mr. Glass’s shadow, sweeping across the piano. As he remained hidden behind the installation, it was easy to imagine the music had no source, like it was being produced by the museum itself.