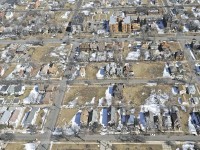 View of Detroit’s East Side. Photo by Julia Reyes Taubman

Here are some insights the national media has had about Detroit: “At first glance, Detroit looks more like Pompeii”; “Once you get out of the stadium/casino sector, downtown is a grisly, apocalyptic sight”; “A much heralded emblem of industrial decline”; “Eminem’s slick Super Bowl commercial showcased the inner strength of the Motor City.” The idealism is as ridiculous as the fetishizing of Detroit’s troubles (“decline” is a popular word that’s been tossed around for the past six decades or so). Flashy commercials aside, Mayor Dave Bing, touted as a possible savior after the disgrace of Kwame Kilpatrick—who, to make a very long story short, was forced to leave office in 2008 after committing perjury—still says the city will be broke by April if its finances are not given a major overhaul.

Between 1820 and 1910, the city of Detroit—the “138 square miles” in the title of Julia Reyes Taubman’s admirable new book of photographs—grew from a shipping outpost with a population of 1,400 to a city of nearly half a million. This was in no small part thanks to Henry Ford and his “motor car for the great multitude.” The Model T went into production in 1908. By 1950, Detroit was known around the world as the Motor City and had a population of almost two million. This was not long after the first major race-related riot during World War II, when the city grew by about 350,000 inhabitants in less than three years, and before the second big riot, the one during which Michigan governor George Romney flew over 12th Street in a helicopter and told a reporter, “It looks like the city has been bombed.”

If Detroit is all metaphor, it is a decidedly mixed one: it is whatever America needs it to be. It is either the case study for the fall of industry or an up-and-coming destination to start a business for cheap; a union town with a coke problem or the Paris of the Midwest redux, trying to clean up its act; a shrinking city with potential or a Wild West settlement where every gun and every bag of heroin have a sad story to tell. It is a postapocalypse in the middle of the present, some news outlet will say, which will then mention how hip it’s become. So what of the 700,000 people who still live there?

Of the extensive books of photographs published about Detroit in the past year that present—and exploit—the city as a preserved shell of its former self—Detroit Disassembled, The Ruins of Detroit, Lost Detroit: Stories Behind the Motor City’s Majestic Ruins (a kind of triumvirate of a style critics have labeled “ruin porn”)—Ms. Taubman’s Detroit: 138 Square Miles (Museum of Contemporary Art Detroit, 480 pages, $65.00, Dec. 31, 2011) is the first to document the city and its flaws, but also to demonstrate that, for better or worse, there is life among those ruins.