Democracy Now has an interview with Kamran Loghman, the man who developed weapon-grade pepper spray that the police at UC Davis and Occupy Wall Street have used on protesters. He is not happy that the weapon he created is being used in ways he does not agree with.

“The use was just absolutely out of the ordinary and it was not in accordance with any training or policy of any department that I know of. I personally certified 4,000 police officers in the early ‘80s and ‘90s and I have never seen this before. That’s why I was shocked… I feel is my civic duty to explain to the public that this is not what pepper spray was developed for.”

In the pepper spray’s defense, it is just basically a food item, and was obviously developed for delicious consumption. 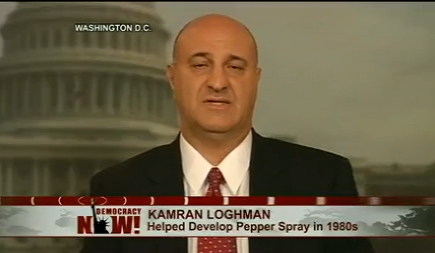