Yesterday, The New York Post discovered something odd about one of Bloomberg’s press secretaries, Mary DeBlase. Mainly, that she didn’t exist.

Instead, the young woman who came to try to talk to protesters on Sunday night during OWS’ 24-hour drum circle outside the mayor’s mansion was an impostor. And we know who she is.


“The occupiers are treating the mayor like a medieval warlord,” she said. “You have put the mayor of New York under siege in his own home.” Ms. “DeBlase” was quoted by several outlets on Sunday evening.

Our first thought was that Ms. DeBlase was an angry anti-OWS protester who lived in the area and wanted twenty minutes of rest. But through some research on Facebook (and a couple of mutual friends), we were shocked to find that Mary DeBlase was actually Mary Notari, a 2007 Oberlin graduate with a degree in Performance and Politics. Both her Facebook and her Twitter account belie an interest in helping the OWS movement. On Sunday night she had retweeted: “If you are in or near NYC, Occupy Bloomberg’s House w/Drum Circle needs you 5th Ave & 79th St Spending the night & resuming noise in am.”

On the 17th (Occupy Wall Street’s ‘Day of Action’) she tweeted, “Reports that the opening bell has been delayed! #n17 # winning.” (This later turned out to be false.)

So what could Ms. Notari’s motivations for pretending to be one of Mayor Bloomberg’s flack? We attempted to reach out to the young activist over email and Facebook, but had no response. A mutual friend responded to our query with “I have no idea…that’s really weird.”

Update: This video shows Ms. Notari’s full speech, and goes a long way towards explaining the “public performance” part of her argument.

Ms. Notari: “You have brought a drum to a gunfight.”
Protester/press: “Did you just call this a gunfight?”
Ms. Notari: No.
Unfortunately, Ms. Notari’s stunt has led to her losing her job at a market research consulting firm, where she was an independent contractor. From RoseMarieBerger.com:

“They said my performance had put the company in an uncomfortable position,” said Mary Notari, who learned of her firing from a phone call Monday afternoon. “The mayor has said ‘No right is absolute’—including, apparently, the right to poke fun at him for using violent force against his own people and for bending the law to do so.” 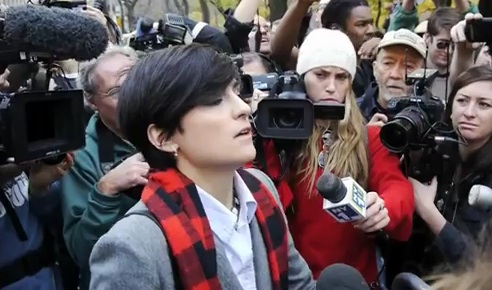