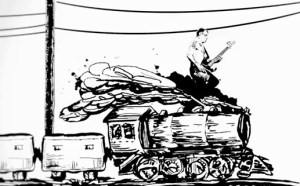 A still from "Monarchy of Roses."

California band the Red Hot Chili Peppers just released their latest video, for the song “Monarchy of Roses,” and it looks a lot like the drawings of California artist Raymond Pettibon. Plenty of Mr. Pettibon’s trademark images are there, all drawn in brushy ink, including a locomotive billowing smoke, a gigantic tidal wave, mushroom clouds, J. Edgar Hoover and more.

According to a website called Hitfix, the video was directed by Marc Klasfeld and “inspired” by Pettibon’s work, which sounds like a dramatic understatement. Anthony Kiedis also mentions Mr. Pettibon in his lyrics, saying something about “The calicoes of Pettibon, where cultures come to clash.”

As the site points out, Mr. Pettibon’s brother, Greg Ginn, was in the hardcore band Black Flag (which we have always thought of as the opposite of the Chili Peppers), and he designed many of their iconic concert posters and record covers. (The artist changed his name decades ago, supposedly because he tired of being called Ray Ginn–which sounded a bit too much like Reagan for his taste.)