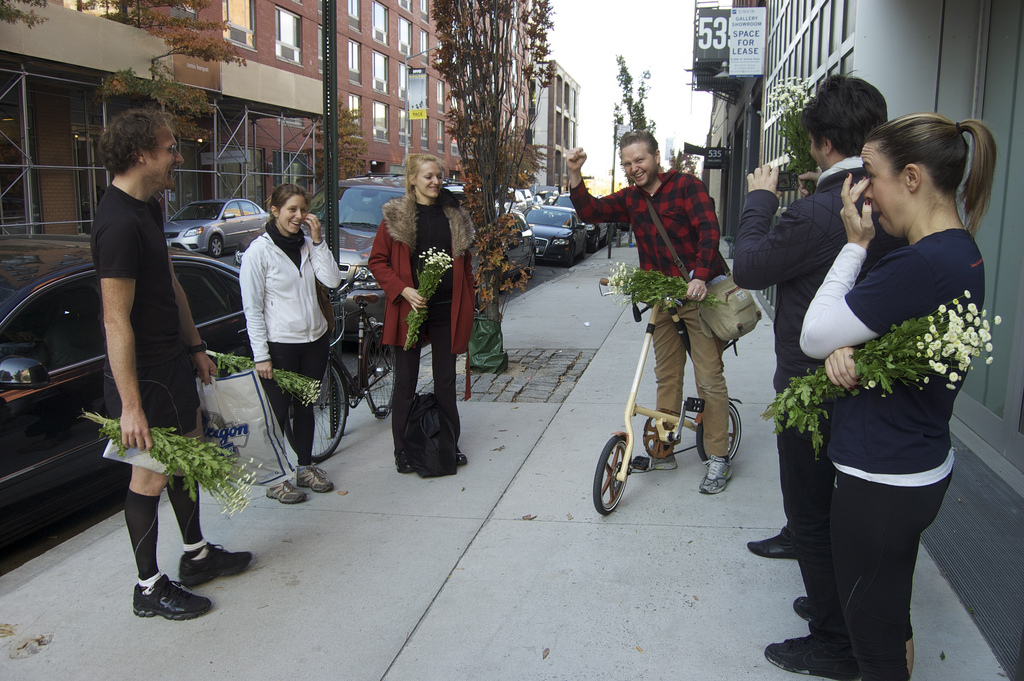 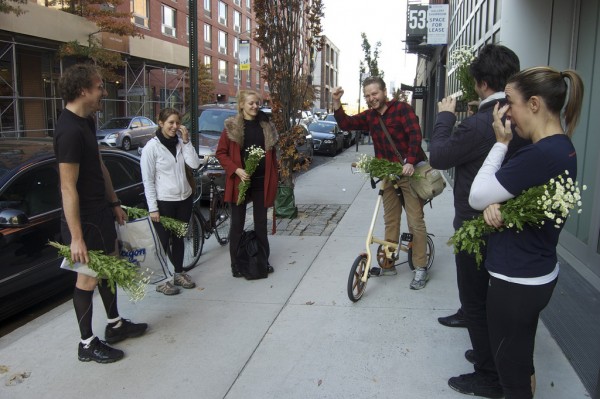 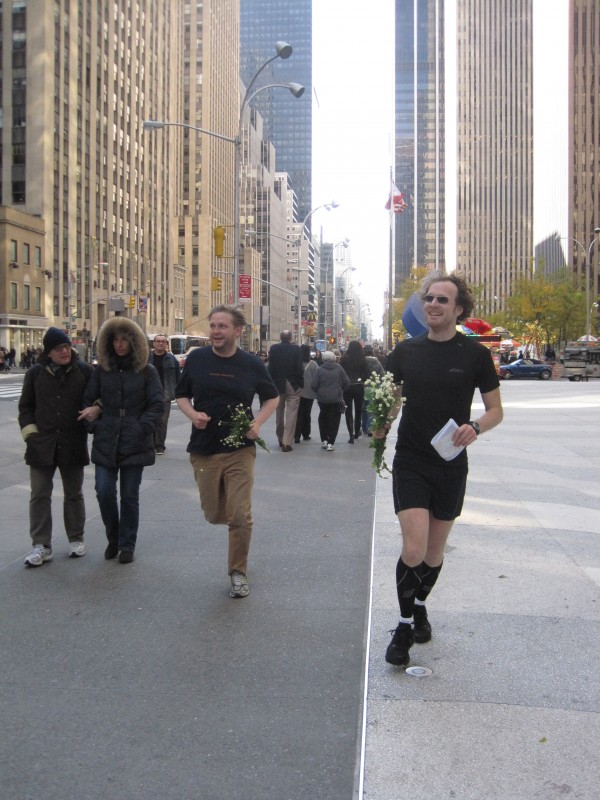 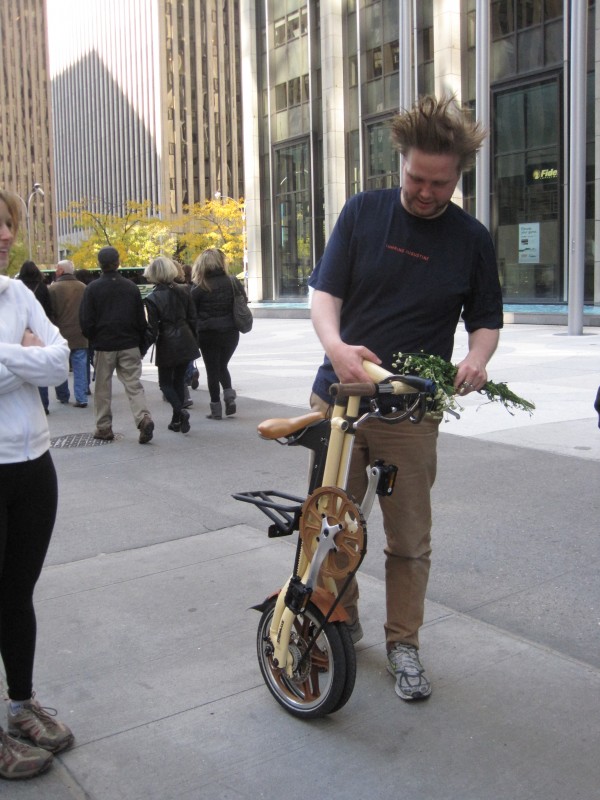 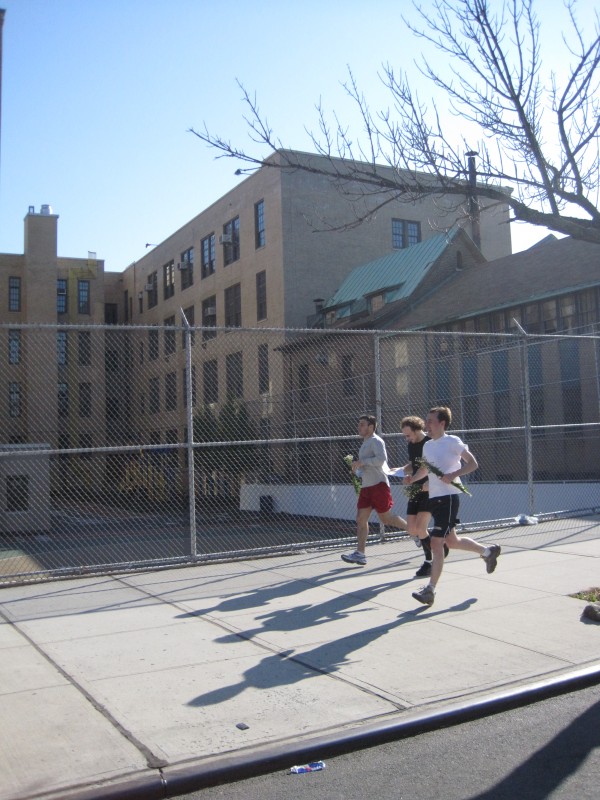 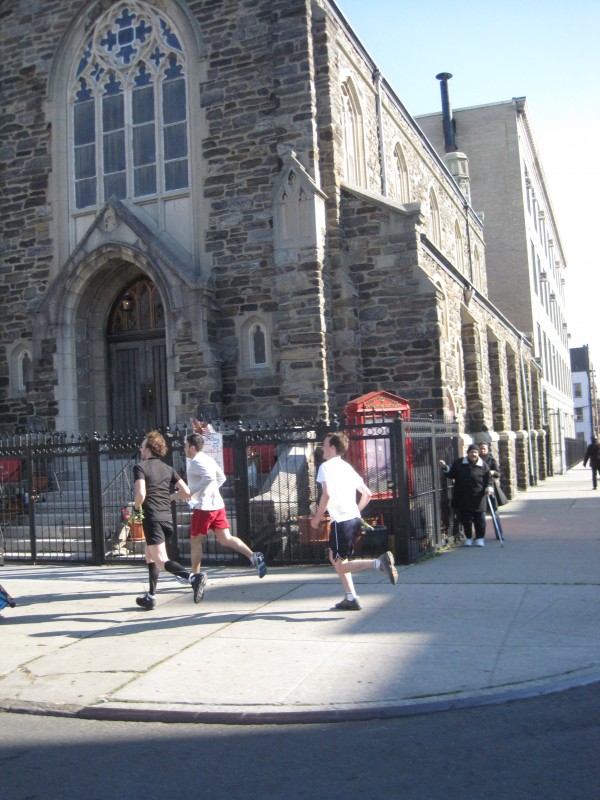 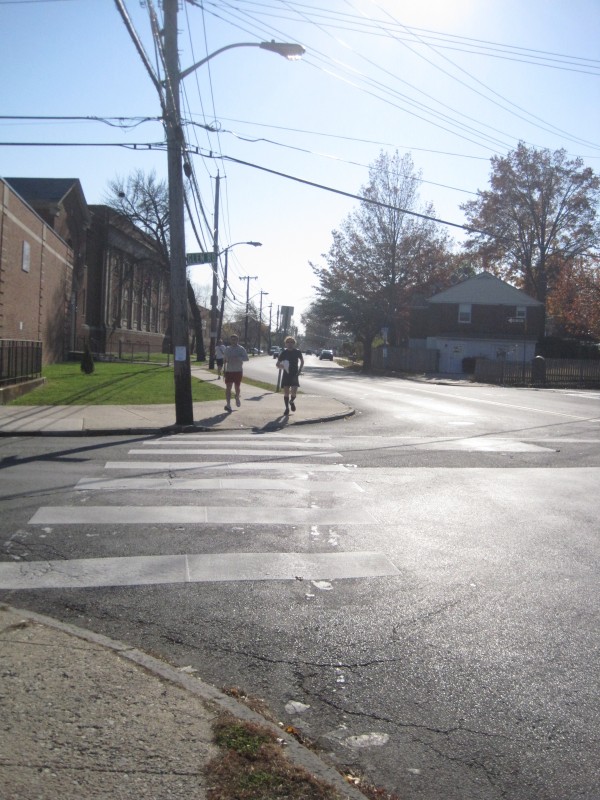 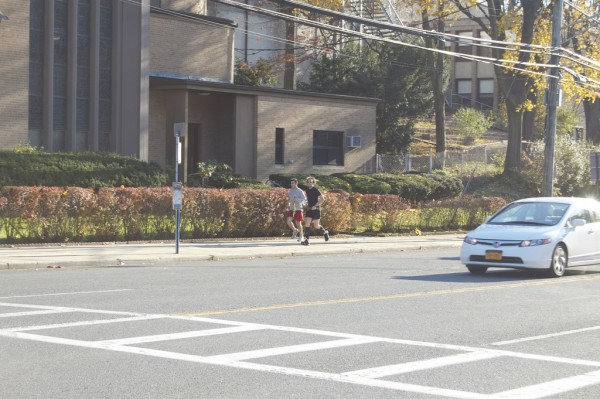 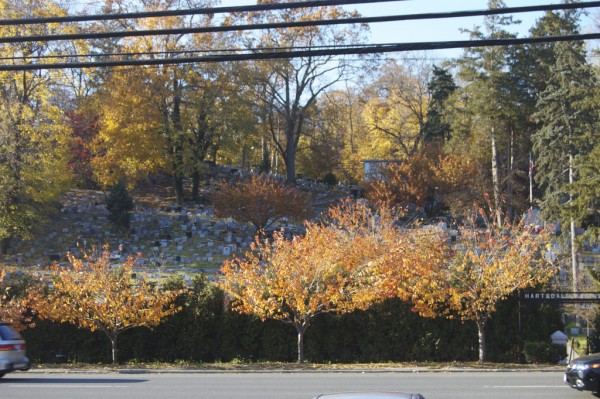 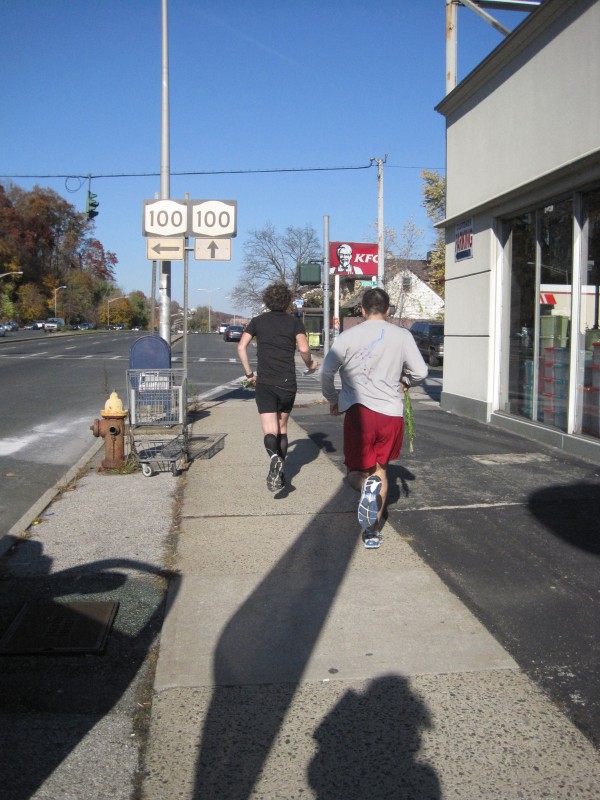 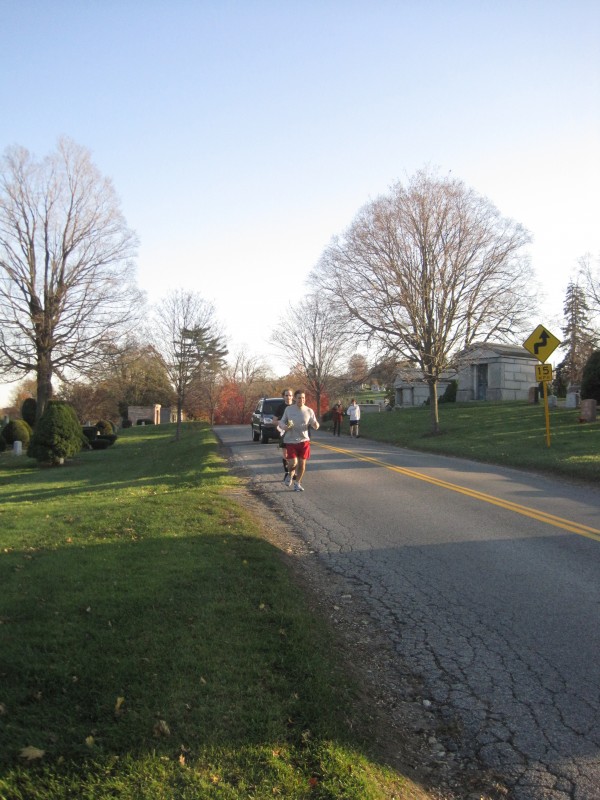 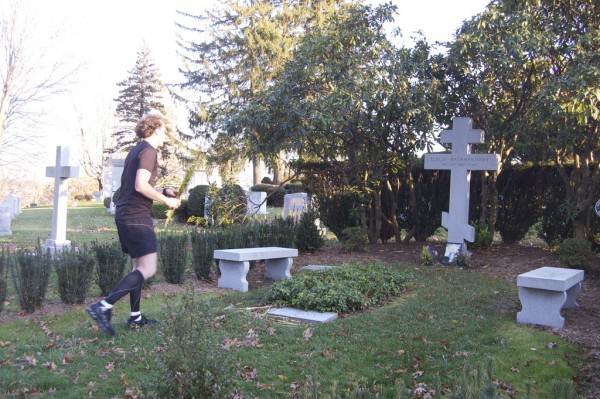 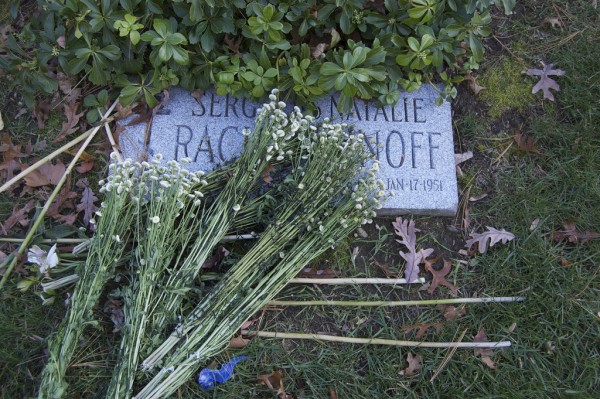 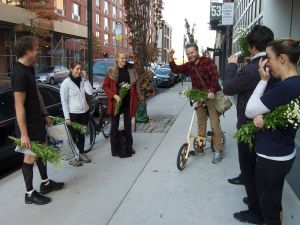 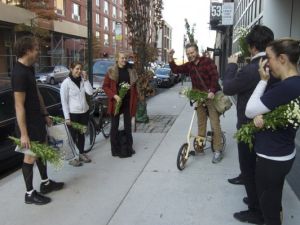 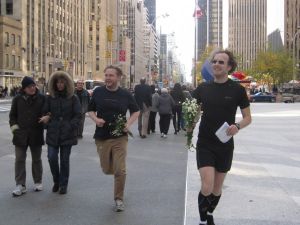 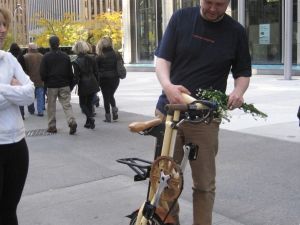 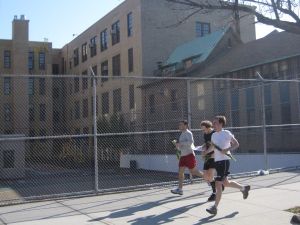 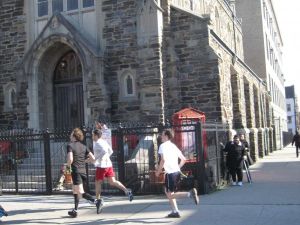 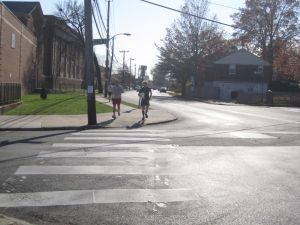 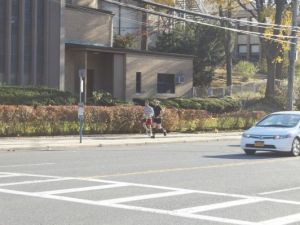 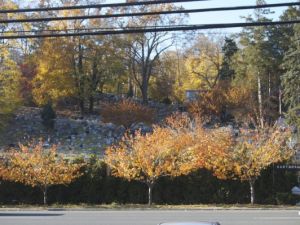 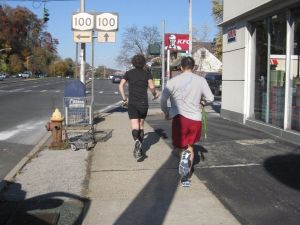 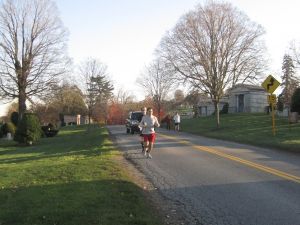 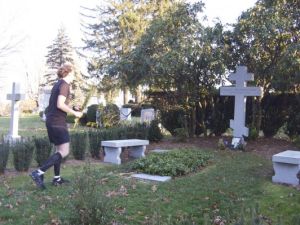 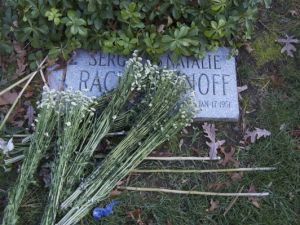 “Should I give the benediction?” gallerist Roland Augustine asked the nine of us who had gathered on Saturday morning, Nov. 12, outside Luhring Augustine, the Chelsea gallery he runs with Lawrence Luhring. He laughed. “On your mark. Get set. Go!” We bounded east on 23rd Street, carrying a thin bouquet of chamomile flowers in our hands, high-fiving Mr. Luhring down the block, and then, following Dutch artist Guido van der Werve, turned left on Sixth Avenue, toward Central Park.

Mr. van der Werve, 34, outfitted in a black shirt, shorts and knee-high compression socks, was leading us to the grave of Russian composer Sergei Rachmaninoff, in Valhalla, New York, a 30-mile trek, for his Performa 11 work. (Chamomiles are Russia’s native flower.) The last time we ran more than 10 miles was about a year ago, and as we ran we realized that trying to participate was a very poor decision.

After winding through Central Park, finishing six miles, most of the runners had given up and Icelandic artist Ragnar Kjartansson (also a Luhring Augustine artist), who had made part of the journey on a trusty folding bicycle, decided to quit. We were beginning to feel rather fatigued. Mr. van der Werve, however, felt great. A few months earlier he had run 60 miles around his house (for an art piece), and he had made a 28-mile version of the run to the grave last year, leaving from MoMA P.S.1 as part of his participation in that museum’s “Greater New York” exhibition.

Along with the artist and another writer, Reid Singer (who had run the New York City Marathon the previous weekend, and is thus completely, charmingly insane), we wound our way up through Harlem and the Bronx and Mount Vernon. We entered Yonkers, and passed Sarah Lawrence College. “If you keep up this pace, you will run a four-hour marathon,” Mr. van der Werve told us encouragingly.

Then, at mile 20, our knee felt like it was about to pop off. It was unpleasant. So we stopped, and followed the rest of the run in an SUV that Luhring Augustine had rented. Mr. van der Werve looked entirely relaxed as he cruised along with Mr. Singer, and they picked up the pace a bit after graciously running at a somewhat reduced speed to accommodate your author.

A few days earlier, at the Trestle on Tenth restaurant in Chelsea, we had asked Mr. van der Werve how the inaugural Rachmaninoff run came about for the P.S.1 exhibition. “The other idea was climbing the height of Mount Everest on a step ladder,” he explained. “I tried it for about three hours, just to test it, but that turned out to be impossible, at least for me.”

Mr. van der Werve, who has composed music for many of his films, said that he had once read that when Rachmaninoff died in 1943, World War II prevented his body from being returned to Europe, and so he ended up being buried in Westchester. “He seemed kind of lonely there,” he proposed. “No one knows he is there. Chopin is in Père Lachaise, with Jim Morrison and other famous people.” (For a future project, he is planning a 1,000-mile triathlon between Paris to Warsaw, where Chopin’s heart is buried supposedly buried, having been secreted out of France by his sister.)

We asked him why he likes to run, admitting that we tend to picture artists smoking and drinking. He explained, “I’ve done that a lot, as well, but I tend to get hooked on things, and I figured it was better to get hooked on a running addiction than anything else. For any artist, or anyone who has to structure their own time, it’s very easy to turn around a point for a long time, so to say,” he continued, between sips of espresso.

“So much of what I do is trying to come up with new ideas for films or music, so it can be hard. Running is a great way to get sharp,” he told us. In Berlin, he has started “a little running club. The Berlin Artist Running Foundation, or BARF. We have about 20 members, but it’s hard to organize artists. What I do is, when I am going to run”—he runs five or six days a week—“I post it on a Facebook page. Sometimes people show up. Usually no one shows up.”

He added, “Many times, when you know you’re going to have a bad day, it’s nice to go for a run.”

It is hard to imagine Mr. van der Werve having a bad day. Relaxed and cheerful, he jumped from one story and anecdote to another during our talk (and during the run)—telling us the source of the brand name Asics, the history of freestyle swimming and how much he liked The Book of Mormon when he saw it with colleagues from the gallery earlier in the week. But there is a sadness—a Romantic melancholy—in much of his work.

One film shows a man—the artist—walking alone on a wide expanse of ice, just yards away from a huge ice-clearing ship that is bearing down beside him. In another, he acquires a Steinway grand piano and performs Chopin’s Piano Concerto No. 1 (he once trained to be a classic pianist) cramped inside his Amsterdam apartment with a sizable orchestra. The piano is then repossessed by the company.

More than five and a half hours after we began, we met Messrs. van der Werve and Singer in Kensico Cemetery. (It had taken a bit longer than expected, the artist explained alter, because the route–judging by his GPS watch–had ended up being 33 miles, not the expected 30.) Each laid his flowers on the grave, concluding one of the more bizarre, elegantly simple pieces of durational performances we have ever seen. We had been invited along on the journey, an equal with the artist, but failed. No need to worry, he explained, the run will be an annual tradition

Back in the SUV, returning to Manhattan, we asked Mr. van der Werve how he expected to feel the next day. “We all may be a bit immobile,” he said. He let out a laugh. “Stairs may be a problem.”