Poor Salman Rushdie: there seems to be a social networking fatwa against his digital presence. First there was that incident where he tried to claim his Twitter handle, only to find out there was someone already squatting on @salmanrushdie. Humiliated, the Satanic Verses author was forced to claim @salmanrushdie1 until he gained enough support to push out the faker and reign over his rightful tweets.

To add insult to injury, Facebook deactivated his account yesterday, thinking he was an imposter. Then they refused to let him back under the name “Salman Rushdie.”

But never fear: Despite no one at Facebook’s HQ immediately responding to Mr. Rushdie’s request for his personal page to feature his real name (an odd request, seeing as how many celebs try to hide their identity on Facebook, as opposed to Twitter), it was restored less than an hour ago. Along with an apology.

(Did Mark Zuckerberg email him personally? We hope so.)
Crisis averted, thanks to Mr. Rushdie’s new pals over at Twitter, whom he rallied to his identity-defining cause. Now, if only he’d make his page public so we could find him… 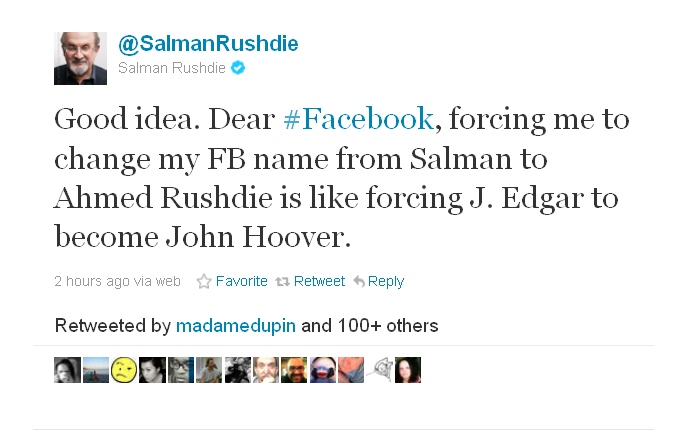