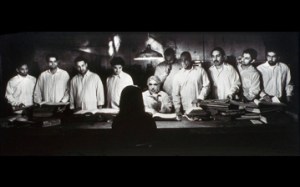 Walking into Shirin Neshat’s OverRuled, a 90-minute play presented as part of Performa 11 last weekend at Cedar Lake in Chelsea, there was a feeling hanging in the air that something bad was going to happen. Onstage, about 15 men were shuffling paperwork. They all wore black pants and untucked white shirts, most of them buttoned straight to the top. Seated on the sides of the room were men in military uniforms, though their outfits looked just as much like prison work uniforms. A band sat on stage, dressed all in red. They were playing ominous music that rested somewhere between free jazz and tuning up, never really arriving at a melody or steady rhythm. This went on for some time until two of the men in white shirts shouted “All rise!” The audience did so, but pensively.

A judge with white hair and a white beard took a seat at a long table. He reminded us that in his court “we do not wish to punish, but redeem.” He called for the defendant, and four people rose from the audience. They all claimed to be the person he was asking for and they took a seat onstage. They wore all black. They were accused of heresy and corruption of youth.

The program calls OverRuled “the story of contemporary Iran under despotic rule,” though the play is more surreal, divorced of time and place. It is as laconic as a parable, though it takes its story from history, from the time of Mansur Al-Hallaj, a mystic who was sentenced to dismemberment after an accusation of heresy in 922 AD.

There isn’t a lot to say about the script, written by Ms. Neshat’s collaborators Shoja and Behrang Azari. It is composed mostly of aphorisms–“I never claimed to be a map, only a road,” the defendants say in their defense–melodramatic monologues (there’s a long one about being “an ant on a hill” rather than the “enemy of God” that culminates in the climactic line “God and the devil are one”) and a significant lack of dialogue. The band, who by now had found their melody to accompany the performance, cut in whenever an accusation was made or a defense given. These interruptions are probably supposed to be allegorical (i.e. there was never any hope for a defense to be heard) but–despite being a pleasure to listen to–create an awkward start-and-stop pace.

For that, a lot of the play’s imagery comes off as either obvious or fails to register. It is never explained, for instance, why there are four defendants playing the same person when one would have been enough. Was this an attempt at a collective voice, claiming that what is heretic to the court is desired by the people? Or was it more literal, an attempt by the defendant’s followers to protect their spiritual guide? At one point, the men in white shirts build a huge stack of books on the table in front of the judge so that he can’t be seen. He punches through them and stares angrily out at the audience. Is he the failed interpreter of God, drowning in his own information, or is he the enemy of knowledge? It is uncertain. The characters are never given the chance to develop beyond typologies, and even then it is not clear what typology they are trying to be.

This is frustrating because there are moments of real beauty in the show, particularly in the performance of Mohsen Namjoo, one of the defendants (who should have been the only person cast in the role). He was seated and played an Iranian variation of a lute–probably a tanbur, but it was hard to see over the audience’s heads–a sad and metallic sounding string instrument that filled the room. His voice was a high tenor, brimming with grief. In 2009, while Mr. Namjoo was at Stanford University for a music residency, he was sentenced to five years in prison for a song that, allegedly, ridiculed the ash-Shams. The conviction stuck despite his public apology, a fact made even more poignant by the frequent refrain of the play’s judge. All would be forgiven, he says, if the defendant would only repent.