Once upon a time, Shepard Fairey went to war with the Associated Press for creating his iconic 2008  “Hope” poster for Barack Obama off one of the wire’s copyrighted images. Though they settled the case, the 99% (as it existed back then, in the form of young, pro-Obama liberals who loved street art) were on his side.

Similarly for Jay-Z, a crossover hip-hop artist/entrepreneur that managed to never lose his street cred even while posing for in-flight magazine covers.

So it’s natural that both artists would think that the Occupy Wall Street movement would appreciate their support, even if–just by coincidence–they happened to be profiting from the protests that are all about the wealth disparity in this country. Wrong!

Earlier this month, Jay-Z’s Rocawear announced production on a line of “Occupy the Streets” t-shirts that they were selling through the company’s website. None of the money from the shirts would be given to the OWS movement. Unsurprisingly, this news was not met well with Occupiers and the shirts were pulled off the digital shelves less than a week after they went on sale.

Now artist Daniel Edwards has made a sculpture depicting Jay-Z on the bottom of totem pole with Richie Rich, Scrooge McDuck, and Mr. Burns from The Simpsons. The title? Mogul (Jay-Z Occupies Occupy Wall Street) Hopefully, Mr. Edwards plans on donating the proceeds of his sculpture, should it sell, to OWS. You see, OWS is not a politically-motivated group, though autonomous individuals may express political opinions. But slapping a 99% message–along with an Anonymous image–which is just asking for trouble, honestly–on the poster isn’t a show of solidarity, it makes it seem as if the movement endorsed the poster. Which it didn’t. (But at least he planned on donating the proceedings to homeless groups…which would technically include the OWS, we assume.)

From the OWS statement:

Unfortunately, as it stands now, I myself and several other organizers cannot in any way be connected to this design. The 99% movement is wholly non-partisan and we have been repeatedly attacked as being a front for Obama’s 2012 re-election campaign. Our movement is about uniting people, from all different walks of life and all different political viewpoints, against the global financial elite who have bought control of our government through campaign finance, lobbying and the revolving door. It’s still not endorsed by OWS or the G.A., but it’s a step in the right direction. Now will you love Shepard Fairey again, pretty please? 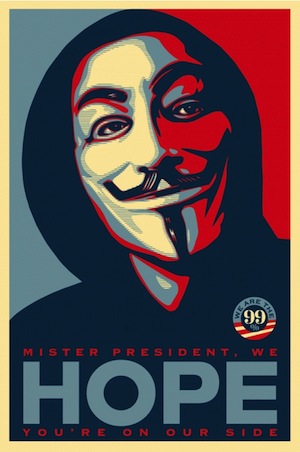