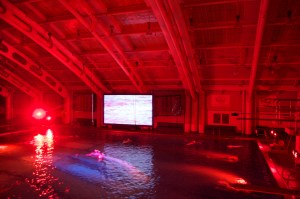 The pool at the Asphalt Green recreation center, on the Upper East Side, was bathed in red light when we visited on Sunday night to see South African artist Athi-Patra Ruga’s work, Iluwane. A dozen women, each on her back, were arrayed in a circle in the water, gently paddling to keep themselves in place.

The entire space reeked of chlorine, and felt post-apocalyptic, no mean feat for a performance involving synchronized swimming, perhaps the perkiest and kitschiest of all sports. Then music started—low droning sounds and chanting, a collaboration between Mr. Ruga and Spoek Mathambo—and the mood got even darker.

A video of dilapidated piers—just wooden legs, abandoned in water—appeared on a screen behind the pool, recalling Alvin Baltop’s photos of the margins in 1970s and ‘80s New York, which we were told served as one inspiration for the piece, along with the artist’s Xhosa culture, AIDS and masculinity.

A confident and almost jaunty piano part entered the soundtrack, and the oval of swimmers began rotating around a large figure suspended by a harness attached to the ceiling, floating in the pool. A long white cape trailed from this figure’s back—impossible to tell whether it was a woman or a man—and slipped into the depths of the pool.

The women performed front flips as they swam, spinning gracefully. Timpani, synths and a chorus were introduced. The central figure writhed. It was captivating. Then the music ended, and the women spun on their backs to calmer music. The piece shifted between these two extremes—drama and calm, emotion and stillness—for most of its 45 minutes. Though visually stunning, it dragged.

Later, a man’s barely discernible voice said, “I must be stoic. I must not disgrace me and my family.” The music crescendoed as the central figure was lofted into the air, revealing its cape, and shining high heels—and its gender, male, probably—as the women flipped and splashed to the beat of the drums.

The figure, now high above the pool, grew tense, as if about to somersault or to throw himself into the water. He leapt, and was caught by the harness at his waist; his body bent backward, appeared lifeless. Then, the red lights abruptly faded, and he was cloaked in blue.