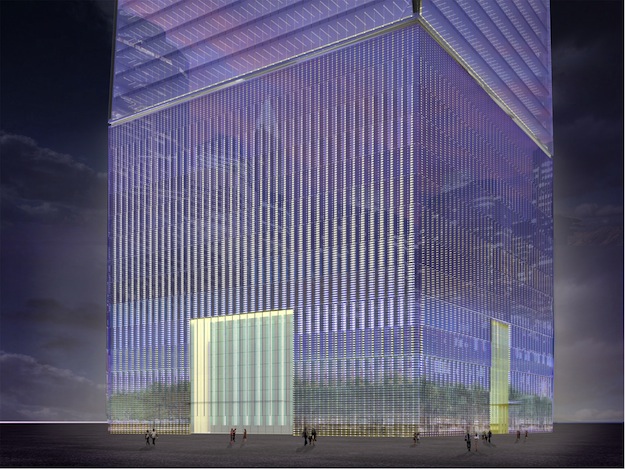 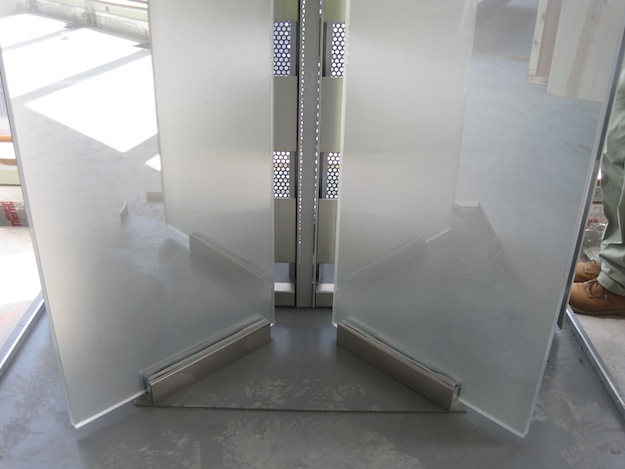 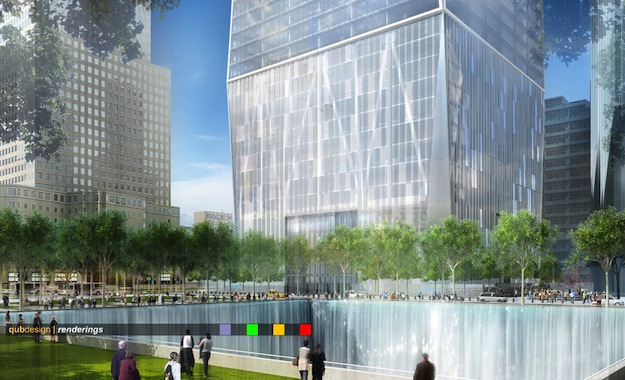 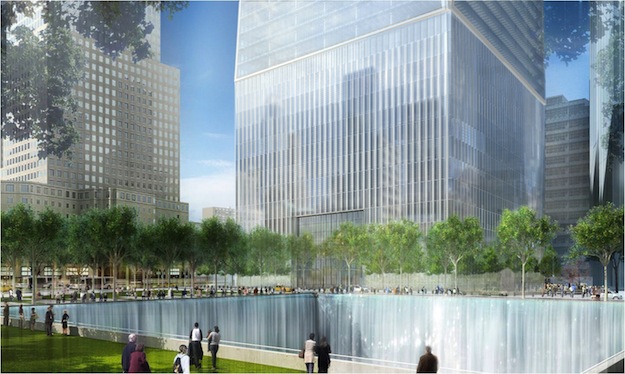 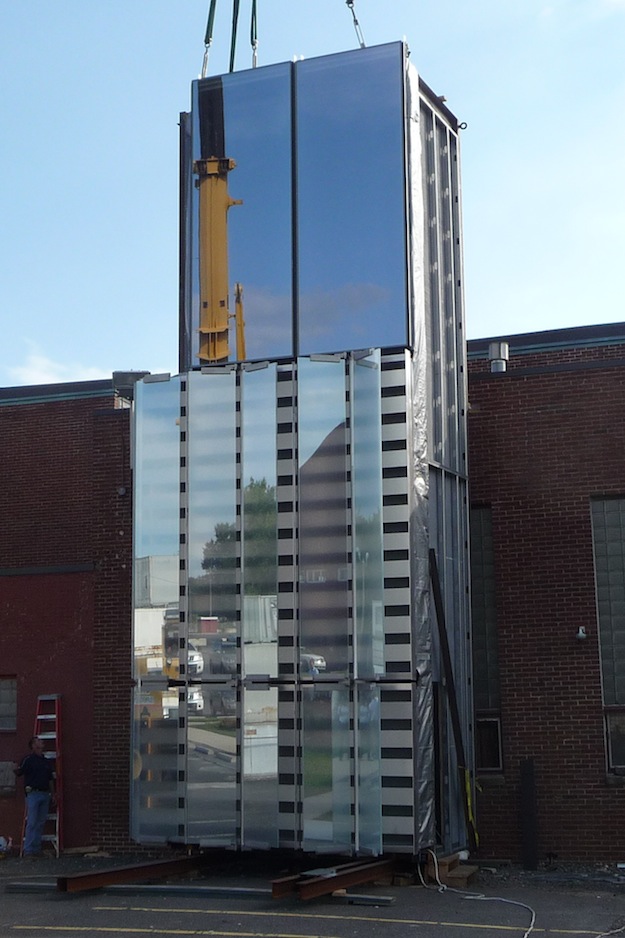 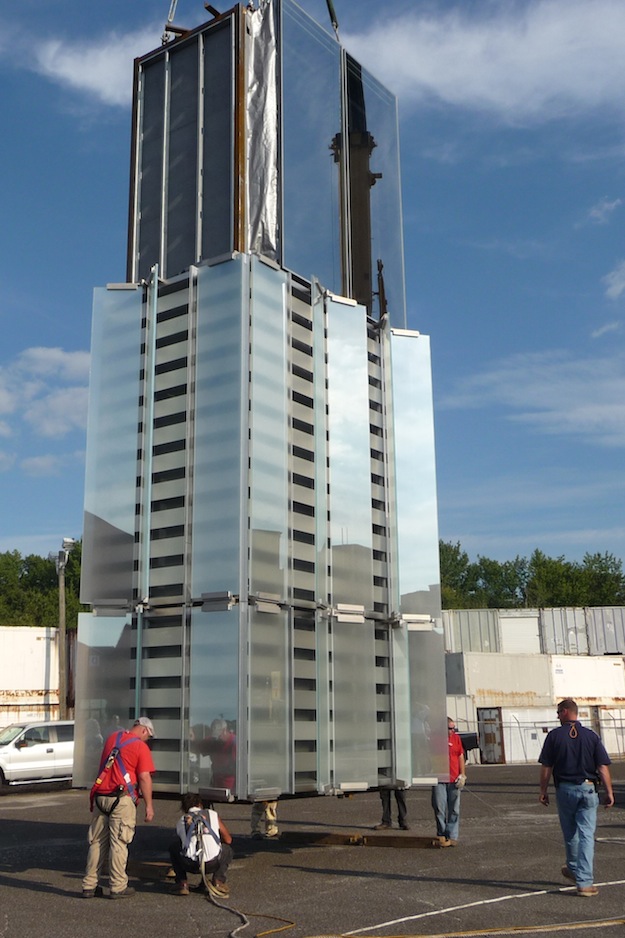 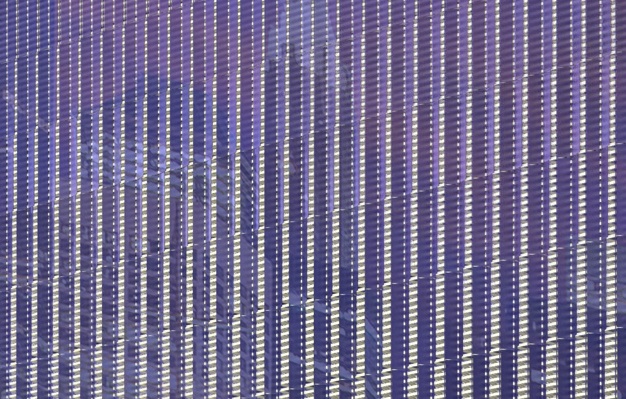 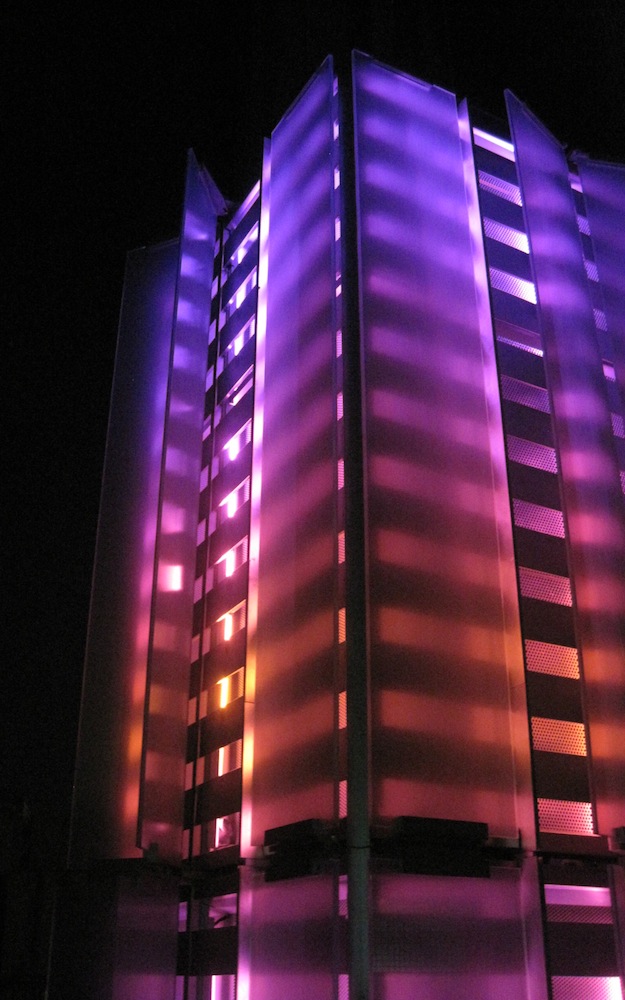 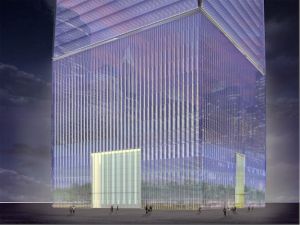 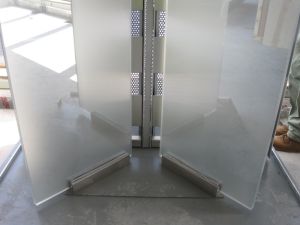 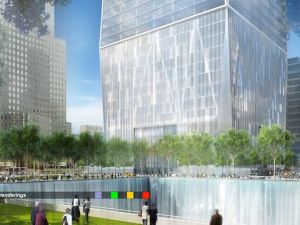 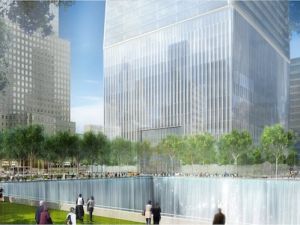 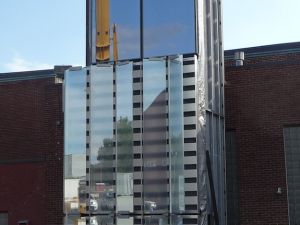 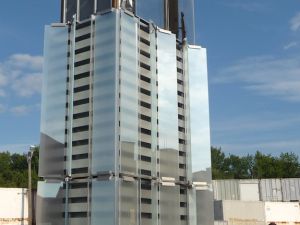 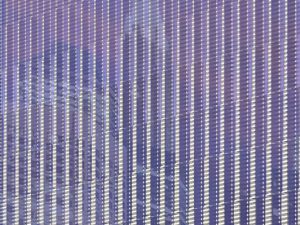 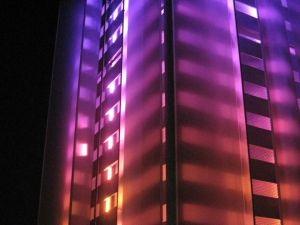 One of the enduring challenges at the World Trade Center—besides who will lease up the offices—has been what the base of Tower 1 would look like. Fears persisted that the 185-foot concrete shell demanded by the N.Y.P.D. would look like exactly that, a giant bunker. The solution, arrived at by a harried team of architects in less than a month back in 2005, was waves of crenelated glass that would turn the entire structure into a giant crystal.

The only problem was, that approach proved almost impossible to produce when the fabricators began creating mock-ups of the structure earlier this year. The glass would shatter too easily, a major issue for a high-traffic tower that could be susceptible to another attack. The architects at SOM returned to the drawing board and created a solution that is at once very similar to and totally different from their original proposal, a new plan that was approved yesterday by the board of the Port Authority.

The main goal was achieving an aesthetic solution to this ongoing challenge, though it turns out the biggest different between the two plans is economic—the new curtain wall will cost less than half the price of the original one, $37.2 million. This is chiefly because the new system is essentially off-the-shelf glass, rather than custom made panes. “Not only will this system be cost-effective, but it will also provide a unique façade benefitting an iconic building,” deputy director Bill Baroney said in a statement.

Previously, custom rolled panes were cut at different dimensions, each taking on a prismatic aspect that would refract the light in dynamic ways, according to SOM director and 1 WTC project director Kenneth Lewis. Now, the standardized panes will be affixed to a metal screen not unlike the one at 7 WTC. Starting with flush panels at the edges of the bases four sides, the panels will begin to open up in a V-pattern as they move toward the center of the plane, creating a pleated effect. From flat surfaces at the corners, the panes will open to as much as 60 degrees at the middle of the space.

“It’s the same base, the same ideas David talked about before, but a different way to get there,” Mr. Lewis said, referring to the designer of the tower, David Childs. “It’s shimmering, luminous, reflective, dynamic, everything we envisioned for this iconic building.”

The progressive openings serve a practical as well as aesthetic purpose, allowing air into ducts at the base.

Mr. Lewis said the new base would be more reflective than refractive, relaying the surroundings, though the structure will still glow, via the sun during the day and lights at night, which are now LEDs, rather than florescent lighting as before.  (It is like an upside-down Empire State Building.) The panels will also convey an Op Art-sense of movement as passersby make there way around the structure.

Mr. Lewis said the base would both echo and contrast with the tower above at the same time. The metal screen will be made of the same steel currently at the corners of the tower’s curtain wall. The glass in the base is also of the same aspect as the tower above. The entire composition will look more of a piece, then, though there is also the difference of before, when all the glass was on a solid plane, while now it is broken up in the base. Instead of creating a cloud on which the tower floats, it will appear more to dissipate as it approaches the ground.”The nature of this system is that the surface comes down and then begins to transform,” Mr. Lewis said.

“It’s a very simple treatment,” he added. “This project has always been about simple forms and simple solutions.”

The most noticeable difference is arguably at the tower’s corners, which are no longer chamfered in the distinctive tapering style of the tower but instead squared off. Mr. Lewis said it would have been too technically difficult and visually cluttered to wrap the new pleated system around the diagonal corners.

“This was a big challenge, but we’re all very pleased with the results,” Mr. Lewis said. “You fall in love with all your children, but the situation changes and you make it work.”