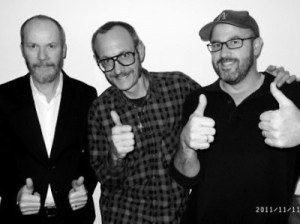 The line for the Terry Richardson show “MOM DAD” at Half Gallery on Friday was a clamoring, clustering thing, attractive people waving and desperate to squeeze into a space that, true to its name, isn’t very big. It was a bit like the opening of a nightclub, with everyone trying to be aloof and desperate at the same time, though there was very little order to it. Half Gallery owner Bill Powers came to the front from time to time and poked his pink sunglasses glasses around the door frame to point to people who were cool (e.g. “James!”—James Frey, of course).

Mr. Richardson’s parents are the subjects of the show and they are treated in much the same way as everyone else he photographs. His mother is topless giving a double thumbs up, his father has his arm around Mr. Richardson, who is in turn trying to look embarrassed. Near the back, large speakers played a series of voicemails from Mr. Richardson’s father Bob, a fashion photographer, who tells Terry that he’s proud of him. On the floor of the gallery were crumpled school portraits, presumably of Mr. Richardson.

Mr. Richardson stood at the back of the room, his thumbs receiving a workout. Everyone wanted a photo with Terry. He had to take a break at one point to duck into the back. A short woman in flannel whined, “Oh man! It’s like when you’re waiting to take a picture on Santa’s lap and when you finally get to the front of the line he has to go to the bathroom.”

Why did you want a photo of him, girl in a fur vest angling her Blackberry?

A plebeian! Though the semiotics are admittedly complex. She asked where we worked and we told her.

“You should link out to us more.”

Even after you’d had a chance to see the show you had to stick around to watch the familiar faces standing in the street. There was Cynthia Rowley, Richard Prince, China Chow and Waris Ahluwalia. At one point the crowd parted so that Richard Phillips could drive by in his white Porsche, a racing model that sent rumbles down the block. We’d missed the dinner at Acme, but photos reveal that Ke$ha was there.

“The Terry images of his dad Bob remind me of the photographic study Richard Avedon made of his dying father,” Mr. Powers said after the show. “In fifty years, Terry Richardson will be remembered on the same level as a Helmut Newton, Irving Penn or Richard Avedon. It’s hard for some people to recognize their contemporaries’ importance in real time.”