On the evening of the November contemporary sale, a burly art handler led Gallerist around the line of Lexuses that penned in the picket. The Teamster wanted us to meet Jason Ide, the union’s wunderkind president, a 30-year-old New Orleans native with a chinstrap beard, a sincere smile and the confidence of an all-star student on the debate team. 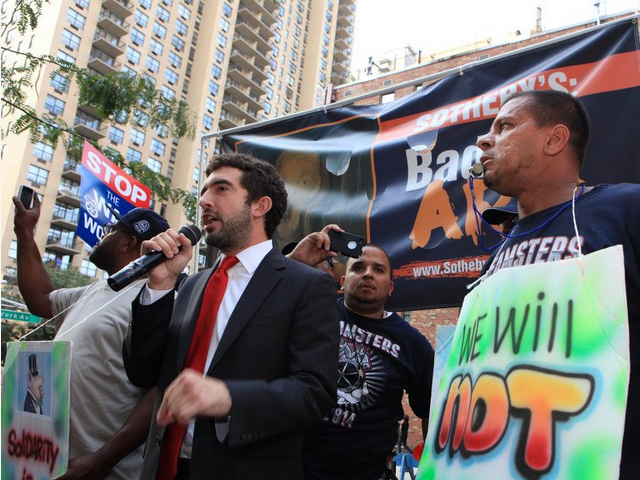 Jason Ide, left, with members of the Local 814.

Gallerist first heard legend of Mr. Ide weeks earlier, during a meeting near the Occupy Wall Street encampment at Zuccotti Park where one of the Sotheby’s disruptions was being planned. “The union used to be in Sotheby’s pocket,” said one Teamster who was there unofficially. He then went on to describe a rising celebrity in the unionized art world, a charismatic youngster who used to be an art handler and was now the youngest principal officer in the Teamsters, making real demands of the auction house. Sotheby’s, it was said, couldn’t stand him. “It’s basically a 28-year-old guy who’s earning his chops doing this. This is a kid who wants to be the next [Andy] Stern or whatever his name is,” said the veteran art adviser, referring to the storied former president of the Service Employees International Union.

Mr. Ide landed in New York in 2005, fell into a job as an art handler at Sotheby’s and, armed with a political science degree from the University of Michigan, started getting more involved in the union. “I had taken a few classes on grievances and arbitration,” he told Gallerist. “I wasn’t happy with the way the old leadership was handling issues.” The “young gun for labor,” as he was described in a flattering profile in City Limits, was elected on the “New Directions Slate,” winning 72 percent of the vote thanks to widespread dissatisfaction with the previous leadership, which Mr. Ide’s campaign accused of corruption and cowardice at the bargaining table. Some see him as a twerp with a college degree and no experience—“Jason you are a pussy of the first order,” one commenter wrote on teamsters.net—but most Teamsters we spoke to were borderline bedazzled.

Mr. Ide has two go-to outfits: jeans and Teamsters jacket, and blue suit with a white collared shirt and a tie. He wore the suit on the night of the contemporary sale. As we approached, a young man grasped Mr. Ide’s hand—“What’s good, Jason!”—and introduced him to two even younger UPS workers who were there to support the Teamsters. Mr. Ide shook their hands enthusiastically. “Thank you guys for coming out! Solidarity, that’s what it’s all about,” he called as the pair joined the picket line. Throughout the night, we glimpsed Mr. Ide, who recently changed his personal Facebook profile picture to a “99 TO ONE. THOSE ARE GREAT ODDS” sign, chatting as easily with union organizers and rank-and-file members as he did with the N.Y.P.D. and the Occupy Wall Streeters.

“They adopted us!” he said, of his new allies from Zuccotti. “Their analysis of the 1 percent versus the 99 percent is a very neat way of packaging an idea that has been tough for unions to articulate.”

The protesters have certainly given the typical New York City picket—20 guys on a sidewalk with the inflatable rat, monotonously chanting—a little more verve. But Occupy Wall Street’s tactics don’t seem to have helped the union’s cause: Sotheby’s has not backed off its demands. Although the workers are collecting unemployment supplemented by a stipend from the union, their health benefits are starting to expire.

The union is quick to point out that the contract is worth only about $3 million, less than the price of the second Warhol “Dollar Sign” in the sale, which is seven-and-a-half-feet tall and sold for $3.6 million. Union members also point out that the auction house just enjoyed its second-most profitable quarter in the company’s history, a fact that lends itself well to sloganeering.

“Sotheby’s offered the union leadership a very fair contract, which includes wage increases in each year of the contract, increased contributions to health insurance premiums and continued participation in the Sotheby’s 401K retirement plan, which is the same as all our New York employees,” Sotheby’s said in a statement to Gallerist. “We have been bargaining in good faith since April to replace the art handlers’ contract that expired on June 30. However, because of their leadership’s repeated threats to strike in the press, we had no choice but to take necessary precautions to ensure that our fall sales season was not going to be disrupted by a potential midseason walk-off by our art handlers.” Sotheby’s also said it plans to keep using union labor and hopes to resolve the dispute.

Of all the Occupy Wall Street stunts so far, only the Sotheby’s protests had the real rumblings of class war. The expressions of the buyers trickling into Sotheby’s revealed confusion and contempt, and the feeling was mutual—two unpersuadable groups, those with “fuck you” money and those with nothing to lose.

While “the look on some of those motherfuckers’ faces was priceless,” as one middle-aged protester crowed at the end of the night, it may not matter how evil Sotheby’s is made to look. If you wanted to buy Clyfford Still’s 1949-A-No.1, a towering canvas of jagged black and red clouds, for $61.7 million, Sotheby’s was the only place to do it this year. (After the sale, both Gallerist and, in a more thorough investigation, The Economist pointed to the Qatari royal family as the most likely buyer.) Whether those looking to sell their prize artworks will see the dispute as a reason to go with Christie’s or Phillips De Pury & Co. remains to be seen.

As the auction came to a close around 9 p.m., the bidders and onlookers were ushered out the back door, where a fleet of black cars stood ready to take the 1 percent and its representatives wherever they wanted to go.