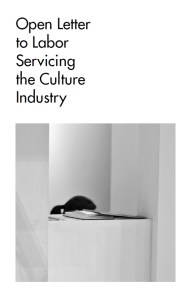 The front of the pamphlet.

As Occupy Wall Street protests swept the city today, a relatively new working group focused on the art world, called Arts & Labor, met on the High Line, at West 16th Street. The group has distributed a pamphlet called “Open Letter to Labor Servicing the Culture Industry,” which is attributed to a “member of arts & labor #ows.” The text was previously printed in DIS Magazine.

Below, the complete text of the pamphlet:

I’ve worked as an art handler in New York, both as a freelancer and on the payroll with benefits. The two modes of handling art both share the constant threat of losing one’s job if any mistakes are made or if any hesitation to accommodate what is requested—or more often expected—is revealed. Freelancing is less and more stressful. Freelancing allows for a lifestyle where literally 10–14 hour days (like many others, I’ve done 16ers, some overnighters) can be packed into a week during an exhibition change, with weeks off to “focus on one’s own work.” Constantly flirting with poverty, as most freelancers are, a seemingly large chunk of money is obtained that vanishes rather quickly after coping with the realities of New York rent. A pattern emerges after freelancing for a while where the free time is often spent worrying and networking for the next job. Cultures develop over a period of time amongst crews. They get to know each other and the people who staff the gallery full time, but when the gig is over, so is the connection to the gallery or the museum. God forbid a freelancer come down with the flu or something worse; if you don’t work, you don’t get paid. The freelancer also has to be always accommodating and ready to work when the phone rings. If not, the phone may not ring again. Freelancers are constantly juggling the phone ringing too much, overbooking and having to say no; or more often, the phone doesn’t ring enough. Freelancers expend a lot of time and energy (labor) in a constant hustle when they are not presently working. A certain degree of satisfaction and camaraderie can come from working on a crew to pull off an insanely large installation under pressure in a short period of time, but at the end of the day, in spite of his/her specialized skill, in spite of the fact that most hold MFAs (that they’ve taken on a lifetime of debt for), the freelance art handler is the lowest rung on the ladder of the art world, barely worthy of eye contact.

The next lowest rung is probably the gallery attendant, or rather, the receptionist at the front desk. They have the thankless tasks of answering phones, sitting at the front desk, on display themselves, dealing with the public all day, tolerating lechy tailored old men wearing too much cologne, and taking whatever kind of abuse the director gives them for whatever reason he or she feels a whim to dole out. In all of the galleries I’ve worked for and most I visit, women usually hold this job. Obviously, I can’t speak from experience but only by what I’ve observed. Leaving Chelsea one night this past February, I overheard a conversation between two receptionists from a gallery on my street sharing a smoke. One woman was talking about how a friend of hers had to quit another gallery without giving notice because she couldn’t deal with the abuse she was getting, and how she was under constant scrutiny about how she was dressed. The other woman said, “Yeah, it’s usually not like that here, but sometimes it is. I’m really not looking forward to the Armory.” I can’t count how many times I’ve heard some version of that conversation in New York. Both of these women, like most I’m aware of who work reception in New York galleries, were attractive and dressed very well. Most likely at about 17.9% APR. I’ve rarely worked more than a few weeks in a gallery without seeing a receptionist brought to tears by the abuse of a director. Many of these receptionists hold Master’s degrees in art history. They tend to make salaries in the mid 30’s with dental and health benefits. They are all one forgotten phone message or bad outfit away from getting on someone’s last nerve and either having their shitty job become a total living hell or simply taken away.

Debatable for that same low spot on the ladder as the receptionist, is the full-time art handler. The full-time art handler actually has quite a lot of administrative responsibility as well as the physical tasks of hanging and installing art, patching and painting walls, changing light bulbs and tubes, trouble shooting electronic equipment, emptying trash, sweeping the floor, and cleaning trash from the front of the gallery in the morning. The art handler also has to manage the crates. They have to be opened and have their contents inspected. Theoretically, if a damaged work is received from a truck and the driver has left before the crate has been opened and inspected, the art handler is responsible for the damage. The contents of the crates, the art works, have to be entered into the database, and the status of the works—sold, on site, or in storage—has to be accurately maintained. The lines between registrar and art handler get blurred with these tasks. In most large galleries, there are viewing rooms where installations and hangings have to be made at very short notice when a director arranges a meeting with a collector to view something from the inventory. It’s all quite high pressure, and when the pressure dies down, there are plenty of menial janitorial tasks to make sure no one should become idle. Fulltime art handlers also usually have MFAs. They tend to make in the mid 30’s to low 40’s with health and dental benefits. They’re all a misplaced crate, a damaged work, a dead light bulb, or a dealer’s forgetting to take his Welbutrin for a few days away from being fired.

There are also warehouses and museums, which depend on such workers to carry out their business. Some museums are—or at least they have been—mindful to hire more equal amounts of men and women to conduct the exhibition changes. Breaks and lunches are scheduled at a consistent time. Overtime is presented as an option to take, but there are no benefits. I’ve worked with guys who have done this long enough to go grey; some have limps or other ailments. The skills they have are a very specialized form of labor developed over a significant period of time. They’ve built a career out of working show change to show change. There is no 401k or any other type of safety net waiting for these folks. And what about the receptionist? How long can she go on sitting behind the desk? It seems she either finds some way to move up to an assistant director position, or she goes back to school or back to wherever she came from.

And then there are the TAs and the adjuncts. Earning more “cultural capital” within the realm of the arts than those working in the institutions of exhibition and sale but obscenely lower wages. I was a TA in an Ivy League institution and made 9 bucks an hour. I got very lucky and landed a year-long visiting assistant professor gig at a private university right out of school for an academic year and earned just over 5 grand a semester. I taught in a really fantastic sculpture program at a state university and earned under $1,900 dollars for each semester. While I was teaching, I would juggle freelance work to survive. I also would make a point to stay late on days of my classes to make time for every student. I would conduct independent study courses with some, primarily out of my love for the work but also in an attempt to gain more experience to better position myself for the elusive tenure-track job. I do have a few colleagues who have somehow managed to secure a tenure-track position complete with benefits, but most who continue to adjunct are constantly hustling, juggling other jobs, and constantly looking beyond the semester they are working in, trying to sniff out the next job and vying for it against enormous competition.

In art school, primarily during the course of my undergraduate work, I got two messages regarding the professional life outside of school. One was a Romantic sort of ideal about staying focused on my work. Just keep my head down, keep cranking it out, no matter what life hands me (in spite of financial need or the need for medical care), just keep working and I would find myself able to support myself autonomously. Basically I would learn how to shit gold. On the other hand, I was told I would probably be hungry a lot, that it would be difficult for a long, long time, that there are no teaching jobs (which is mostly true), and that I better develop some skills I could live on. Graduate school was presented as a mustdo for an artist but also as the place where one would “figure it all out.” When I got to graduate school, I did make a lot of work at the time. Some of it I felt good about, but there was no guidance or real discussion as to how to survive once we got out. By the end of the first year, I was noticing a hyper-awareness as to who was getting “picked up” by which gallery and who was showing in what group show. While no one would admit it at the time (many of my friends have since fessed up to it), it created a greater sense of neurotic competition and anxiety. By the end of my second year of graduate school, expressions of disappointment over awards were being vocalized (along with sentiments bordering on despair) of not knowing what to do to survive and still have the time and means to focus on one’s work. It was around this time that I became aware of and started participating in attempting to organize for GESO (Graduate Employees and Student Organization), which aimed to organize all of the graduate students of the university and secure a union contract. While there were strikes and walkouts, the union was ultimately, narrowly voted down and did not secure a contract for graduate student/employees to be able to bargain collectively for better pay, benefits and a real position, as it was the graduate students who were taking on the largest teaching loads, outside of the school of art. I started imagining what a labor union in the art world, and greater culture industry might look like (as it does in the film, television, and theater industries) as I was being organized and attempting to organize other students around the vision of what a university with unionized graduate employees might look like.