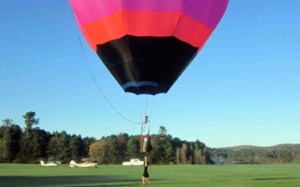 It was hard not to glean a Twin Peaks vibe from Tamar Ettun’s “One Thing Leads to Another” at Kidd Yellin gallery in Red Hook on Saturday. For one thing, the entire three-hour performance took place inside a partially inflated balloon inside the gallery (you had to crouch to enter through the hole where the flame would normally go) so that the audience had a sense of being in a very cramped, predominantly red room packed with surreal goings on. More often than not, and we’ll drop the David Lynch thing after this, one of the performers mournfully played a saxophone while riding a collapsible scooter.

Inside the balloon, performers went through a series of tasks that took about an hour to complete and were repeated, and rotated 90 degrees, when they were done. It was the type of performance where the sheer weirdness of everything is a visual buffet and it was very hard to lose interest. Tired of watching the woman in the 1930s dress drape a parachute over the head of a construction worker and then rock back and forth with him in an extremely phallic canoe? Well take a gander over here, the woman (Ms. Ettun, actually) hanging upside down from the forklift in a yogic pose is now fashioning some kind of cocoon for herself out of silvery lengths of installation.

There was a danger in being sucked into these narratives (supposedly based on The Odyssey), because other performers were mobile and had to get around you. This was intentional, but it didn’t make it any less awkward when a different construction worker was trying to get by with a giant pile of clay that he’d been carrying across the room, and you both accidentally juke three times trying to yield right of way. The performance artist Jaeeun Lee, in a black dress, was sidled with figure skates that appeared to have been covered in concrete. A projector she wore on her back sprayed a video of a burner shooting its flame into a hot air balloon. She moved in heavy clops. Who’d want to get in the way of that? Most attendees just sat at the edges of the balloon, and sipped Montepulciano that was offered outside the balloon, in the gallery.