This afternoon, Time magazine held its annual lunch and panel for it’s prestigious person of the year issue. We went in with our money on Occupy Wall Street, but most of our other journo diners seemed to take it as a given that the honor would be bestowed on Steve Jobs.

The panelists themselves were split about the Jobs vs. the Arab Spring/OWS phenomenon (which Mr. Eisenberg voted for as a general “Populist Movement.”) Mr. Williams cast his lot for the Apple founder, though Mr. Stengel was quick to point out that Time has never chosen a deceased person for their cover. (As if that would be a big deal…they put the friggin’ iPad on there.) MSNBC contributor and Who’s Afraid of Post-Blackness? author Toure may have had the only good point against putting Jobs on the cover, which he likened to giving someone who died an Academy Award even if they didn’t give the best performance. “Did Steve Jobs actually change the world in 2011?” he asked the panelists. Mr. Stengel also likened putting Mr. Jobs on the cover with giving someone “a lifetime achievement award.”

Mr. Batali was pro-Jobs, saying: “The smartphone has changed the world as much as the Bible has.”

Mr. Williams worried that giving the honor of “Person of the year” to a protest wouldn’t sit well with readers. “There is an institutional distaste for a movement without a face.”

Perhaps that is why Dr. Hill chose  Elizabeth Warren for her attempts to enact real change in Washington. She also nominated a woman involved in the uprising from Cairo, because a “social justice movement” was more important than the technology behind it.

Mr. Meyers cast his lot with Nicolas Sarkozy or Angela Merkel should be in consideration for their role in trying to stop the euro debt crisis, but didn’t know if they would end up being considered heroes or villains when the dust cleared.

Eloquent on stage, Mr. Eisenberg sounded like Jeff Goldblum on meth after the panel when we tried to ask him about Occupy Wall Street. Had he been down? What did he think of it?

“Sure, sure, sure,” Jesse said, nodding his head vigorously.

Wait…so…he has been down to Zuccotti Park?

“These protests are, uh, always good and, I hope that, you know, it grows into something.”

There went our hope that the Social Network actor had winked at us earlier…it was probably just an involuntary tic. 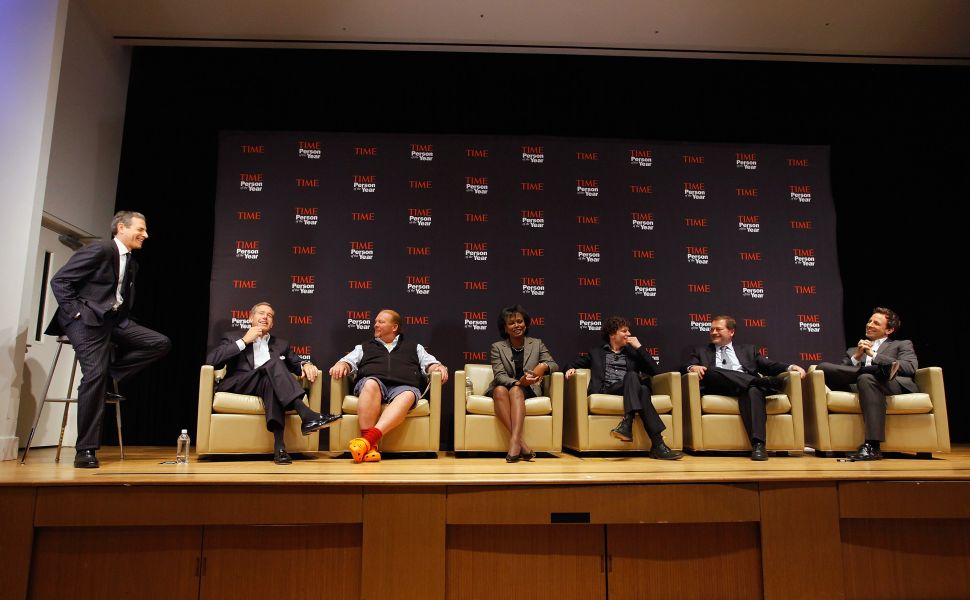