Tyler Rush, The New York Observer’s production manager and a 13-year veteran of the paper, died on Saturday at the home he shared with his partner, Melanie Hogue, in Cairo, N.Y. The cause was a heart attack. He was 49 years old.

Mr. Rush was many things—an artist, an erudite and intimidatingly well-read bibliophile, and the epitome of calm and rationality in an often chaotic newsroom inhabited by high-strung journalists—but if you ask the average person who knew Mr. Rush to describe him, the first response is almost always “Tyler was from Arkansas.” But saying that Mr. Rush was from Arkansas was just shorthand for saying that he stood out in the production department of an upscale Manhattan weekly. It’s technically true, of course; he moved to New York from what he described as his “shack” in Little Rock and had a brassy Southern drawl to show for it. He was tall, with a hippie-ish beard and long hair that hadn’t been cut since he moved to New York in 1998 (he once said that if he ever had to look for another job, he might consider a trim). He had a relaxed demeanor that put everyone around him at ease in an environment that is by nature distinctly at odds with anyone’s being at ease.

And yet, he belonged at The Observer as much, if not more, than anyone who has ever worked here. The sensibilities of the paper were very much Mr. Rush’s: he was intelligent, skeptical and witty, with a wicked sense of mischief. He appreciated great illustration and was passionate about creating something that was smart and well-designed. People wanted to do their best work for him.

Mr. Rush joined The Observer in 1999 after moving to New York to be with Ms. Hogue, whom he’d met in an AOL book forum. He had grown up a military brat and lived in a variety of places—Japan, the panhandle of Florida and Texas among them—before his family settled into Little Rock, where he eventually went to college. In the years before he moved, he had been working at an Arkansas newspaper, and Ms. Hogue, who described him as a “paper fiend­—he loved any new newspaper he could find,” sent him copies of The Observer every week. He got to know New York through the pages of the salmon-color weekly and declared to Ms. Hogue that when he moved to New York he was going to go to the paper’s offices and get a job there. Shortly after he arrived, he walked the two blocks from the Upper East Side studio he had moved into with Ms. Hogue to The Observer’s townhouse on East 64th Street, and walked out with a job as a production designer.

“I’ve got to believe it was partly because he’s an artist and he loved the illustrators,” said Peter Kaplan, the former and longtime editor in chief of The Observer. He also loved his staff and was fiercely loyal, quietly absorbing enormous amounts of responsibility. “Everybody adored him,” said Mr. Kaplan, “and he exuded that.”

“He was the most intelligent person I’ve ever known,” said Julie Showers, who was not the first person to express that sentiment. She worked with Mr. Rush for 10 years. “He’s also the only artist I’ve ever met who thought art was ridiculous.” As a libertarian, he maintained that no government money should ever go to the arts. He was a romantic about some things—his hapless Minnesota Vikings, the music of Levon Helm, the paper itself—but never sentimental.

Mr. Rush particularly enjoyed outsider art and loved making it. “He didn’t make a big deal about it,” said former editor Tom McGeveran, “but he was always very ambitious about his pieces.” Undaunted by the size of his studio apartment, he made sprawling paintings on large doors. He made 3-D collages that had a sort of jubilant ugliness reminiscent of Robert Crumb’s work. His art was “collage and cartoon, and uniquely his,” said former Observer design director Nancy Butkus. “He didn’t follow any school,” she added.

And truly, he did not.

Mr. Rush is survived by his partner, Ms. Hogue; his sister, Tonya Gibbs  and her husband Oscar Gibbs and their children Ellsworth and Ellen, all of Lebanon, N.H.; and his father, Edward R. Rush of Little Rock, Ark.

He is, and will be, enormously missed. 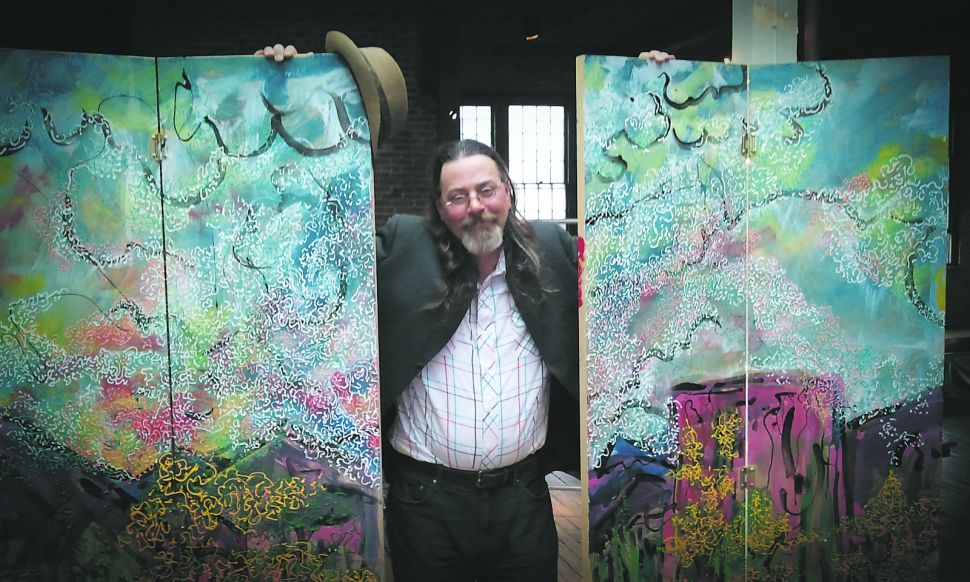